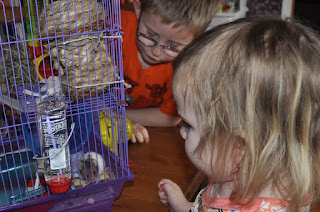 Marcel and Charlotte got through childhood without any major desire for a pet. Their lack of need for something to care for possibly had something to do with me having babies at the point when that usually kicks in. Léon, on the other hand, has asked for a different pet on a weekly basis for over a year. We've had requests for horses, owls, chickens, quail, dogs, cats, goldfish, mice, hamsters, guinea pigs and snakes. At Xmas we gave in and went for a fishy solution - but that didn't work out - the fish eggs we'd bought didn't hatch and he was devastated. We considered a goldfish instead but you can't touch a fish and this week I finally decided a hamster was possibly the way to go. If he loses interest, they don't live all that long, and if not, they aren't overly expensive and don't seem to like company so I'd only need one.

I found a farm breeding them on facebook, so made an appointment for this evening. Poor Anna was sent home from school sick so had to stay home with Marcel while Thomas and I took Amaia and Léon to choose one. They had cages with girls, who were climbing up the sides, obviously full of nonsense and boys who seemed more laid back. Léon opted for a little girl who is 60% white with a browny-ginger head and a gingery-grey bum. On our return Léon decided he wanted to call her Donut but proceeded to refer to her as him all the time so we suggested giving her a girlier name might help focus his mind. So Amaia came up with Rosie which seemed acceptable to Léon as an alternative. So now she's Rosie the Hamster.

I'd forgotten one of my oldest friends, Linda, is a hamster-daft loony so Rosie's holidays are all sorted too which is a weight off my mind because convincing my mother to babysit a rodent might have been harder than convincing the sun to shine during a Scottish summer.

Anyway, so far she's quite fun, she's moved all her food and bedding up into her climbing tubes, presumably in case we try to steal or something. Anna still isn't feeling well enough to have a proper look and Lots is treating her with disdain but Amaia is the most surprising. She's completely thrilled and hasn't left her side all evening!
Posted by Phyl at 11:36 pm