A little too much haste

I have too many windows in my house... 28 to be precise, not to mention the five main doors. I got it into my head, given we're in the middle of a drought, that it would be nice to freshen up the paintwork a little; they're wooden double-glazed units, you see, and I thought it would look better if they were all the same shade of grey/lilac. Off I went to Bauhaus a couple of weeks ago and bought a massive tub of special outdoor wood paint mixed to my colour specifications - the best quality, most expensive they had, mainly figuring it would be cheaper in the long run than me having to paint them annually, which was never likely to pan out. I also thought the whole project was quite doable, given it's a bungalow and none of the window frames is more than two to three metres up and I have no less than three different-sized ladders.
I was down to having three windows and all the doors left on Tuesday morning. I was particularly pleased that I was yet to run out of paint and that there was definitely enough left. The only thing worrying me was the ominous forecast of rain, starting on Wednesday afternoon, for the first time in months. So, I got out extra early around 8:30am with my Danish audio book, my various brushes, and my glasses for the fiddly bits.
The sun was quite strong and I could feel it starting to dry up the paint, so time was short. I dragged the ladder into the shade and ran up it, slapping on the paint as quickly as I could while still doing a decent job. I needed to go back down to move another metre to the left. That's roughly when I realised that over-sized crocs, ladders, and haste isn't the best combo... Pot of paint in hand, I somehow missed my footing, falling not just from the top of the ladder onto the patio, but spectacularly bypassing the patio right over the top of the garden wall and landing half way across the lawn in a flower bed, all the while watching in slow-mo as the grey paint rained down on me and the sun-scorched lawn. I was right, there definitely was enough left in the pot, because it managed to cover my clothes, hair, and about 3m2 of the lawn. Lying on the lawn, winded, I could hear my Danish novel in the distance. It was just getting to the exciting bit where the kidnapped journalist was trying to throw molotov cocktails at the serial murderer! I tried to sit up but the searing pain in my left ankle decided that wasn't the best idea. I lay there for a whole chapter looking at my phone on the windowsill, unable to reach it to ring Charlotte to come outside and pick me up or ring anyone else.
Eventually I managed to crawl in shaking and dripping with paint and text Charlotte that I needed someone to make me lunch. Fortunately a colleague had asked Thomas to drop some crutches off at the hospital for him so I used them for the remainder of the day. But I could not use my foot AT ALL. By day two, still unable to do anything I was forced by the busybodies in my family into a trip to A&E, which is quite different here, but that's one for Contemplating Denmark. I seem to have torn some ligaments in my foot, sigh. And now that the pain of that is getting slightly more bearable on that side, it would appear I also hit my shoulder, arm, side, hip, and bum. I vaguely remember them connecting with the top of the garden wall somewhere mid-flight. Funny how I could only feel the foot for the first day.
Anyway, as usual, I am being a totally unbearable patient. After two days stuck in a chair, I'm climbing the walls... unfortunately not literally. I cannot stand sitting. I have windows that need painting. I can't drive, so I can't go to Bauhaus to buy the now-necessary replacement paint. I need this to be over now! I can already tell that there is NO WAY I'm spending the advisory two weeks 'resting with my foot up'. I'll give it till the weekend, MAX! 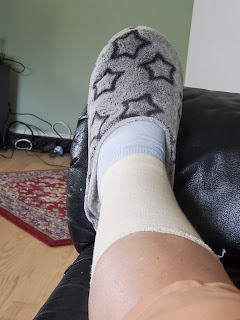 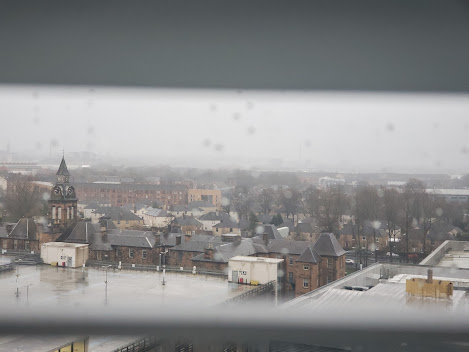 This one is a bit more personal than my standard ones, but it gives me comfort and it makes me smile and is a memory I will cherish, so for what it is worth...

Let's go back to February 13. I'm visiting mum in hospital. She has less than two weeks left, though we didn't know that then. The catering staff come in with her evening meal: an omelette and mash, accompanied by some nuclear-fallout-coloured carrot and turnip cubes. Weird in itself. I’m not sure I’d put those together. They leave and mum, who’s been completely lucid and coherent throughout my hour-long visit till then, looks furtively from side to side and suddenly exclaims ‘Muslim men!’ I’m puzzled, given the guy who’s just delivered the food is almost a caricature of your bog-standard ethnic Scot of the gingerheid variety. ‘Muslim men know a thing or two about these matters!’ she elaborates, gesturing with her head towards her plate. I wonder if she’s trying to tell me she’d rather have a decent curry from the Village Curry house round the corner, than more hospital food.

‘About what?’ I ask, vaguely terrified of what she’s going to come out with!

‘Omelettes!’ is her rather unexpected reply. ‘I can see them out my window’ she explains. The photo above is of the view from her window that afternoon. ‘Can you see them down there?’ she asks. I can see nothing but rain and a rooftop carpark. She insists that I look all the way down the seven floors to the pavement below. She is insistent, so I play along. She needs me to see them – I don’t know if the brain tumours are causing her to see them or the high doses of morphine she’s taking for the brain tumours but I know there is no point in arguing, she needs me to confirm what she can see so I look down. ‘Oh, yeah,’ I say.

‘Do you know what they are doing down there, crouched on those little carpets?’ she asks. ‘Eh no?’ I reply, lost for words. ‘They’re comparing their omelettes, swapping them, then passing them along the row so they are ordered perfectly, by size – from biggest to smallest, fluffiest to rubberiest. And once they are all in the right order, they bring them back inside and up here to us! Told you! Muslim men – they know exactly how to go about these things – clued up they are, well clever! They sure as hell know a thing or two, especially when it comes to omelettes!’

And then, as suddenly as the topic had been brought up, it disappeared again, and with a wink and a smile she sat happily in her bed, slightly in awe of and genuinely impressed by the prowess of the rows of Muslim men on their knees below her hospital room on that drizzly Glasgow winter Sunday.

I’ve no idea at all what inspired the story other than the rubber omelette handed to her by the catering staff. No notion why Muslim men were involved, but by agreeing to her story, she was so calm and happy that I could see them too. It’s truly fascinating how the human brain works. That afternoon, I had gone up to visit her alone, having flown in on the Friday night but Covid restrictions meant she was only allowed two visitors a day and Thomas had gone with Charlotte the day before. She’d been moaning constantly about the insipid hospital coffee that tasted of nothing, so I stopped on my way and bought her a caramel cappuccino to go from Costa. She was happy. Dying, and yet receiving a decent coffee seemed worth mentioning more than the news that she'd just been diagnosed with lung cancer that had spread to her spine, bones, liver, and brain just days before.

I enjoyed my visit that day, in a bittersweet way because she was pain-free and at peace. I think age has helped my perspective. When my gran was dying of lung and brain cancer when I was 16, I found 'mad' stories of this type excruciatingly embarrassing but learning to lean into them and go with the flow was somehow calming. At 16, I remember desperately thinking, that I would prefer to die than come out with something mad and unreal. I wanted to leave this planet with my dignity intact, but at 54, I realised it no longer matters. My mum was happy that day. She appreciated that I could confirm her belief that Muslim men were to be admired for their skills in this department. I know mum loved a good curry so I guess she was probably just complimenting Muslim cuisine and it just came out a bit jumbled up. Nothing positive would have come from me contradicting this moment of confusion. Dying is also a part of living, it's just taken me this long to work that out.

And as an addendum to this story, it seems sweetly fitting that when we put mum's house up for sale after her death, the young family who moved in were 'the Islams'. It's nice to think of their two little girls growing up in the same house we did. I guess Muslim men know a bit about house hunting as well as about omelettes! And I expect there will be some excellent cooking coming out of her kitchen after many years of microwave meals from Aldi.