Denmark is quite a big little country. Until Thursday it was doing OK on the Corona virus front with not a single case. We could see from how things were evolving that it was only a matter of time, of course.... But we're on Funen. Only half a million people live on Funen, compared to over 5.1 million between Zealand and Jutland. So when the news broke that number one had tested positive, we figured it wouldn't impact on our little lives.

It came as a shock when it turned out to be someone on Funen after all. News was released that the TV2 studio was in lock down after a worker had tested positive after an Italian skiing holiday. TV2? TV2! TV2 studio is in our street 😮 It's a long street - about 30km long and we're right in the middle but what're the chances? When the virus finally hits Scandinavia it starts out 15km down our street. 🙄

Here's a wee map just to prove it. 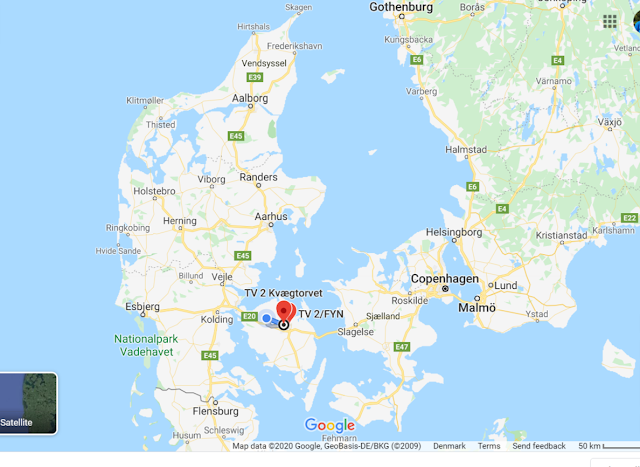 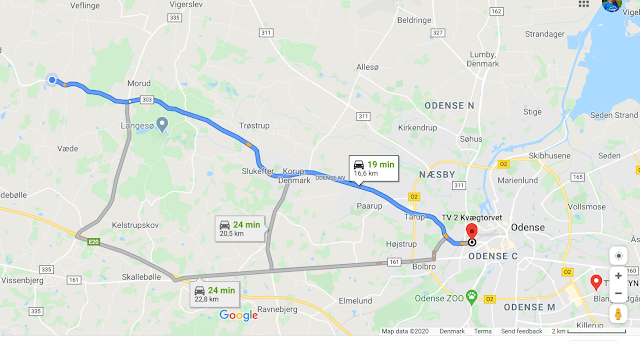 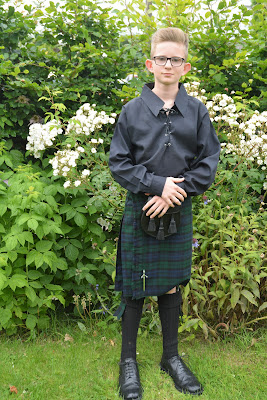 Now we're in Denmark, Léon has taken it upon himself to wear his kilt to school occasionally, and given there are no uniforms here it always comes as a nice surprise to his classmates, the wider school population and even the village in general when he suddenly takes a fancy.

One rule he's set himself is always to wear it when he's chosen to give cultural talks to his English class, which he's done a few times. Next week he's to give a talk about childhood in Scotland, so he's made up 20 conkers on strings - Danes weirdly use conkers to make cutesy little animals rather than for all-out warfare. Odd folk! 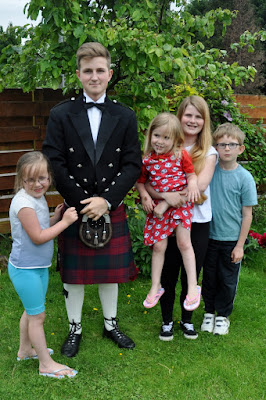 He's also decided to teach them some songs - so far he's printed out 'Ye cannae shove yer granny aff a bus', 'The jeely piece song' and 'Donald where's yer troosers' (complete with his own translations into Danish) - that will be interesting amongst Funen teenagers. He really
relishes his talks an puts his heart and soul into them - often entertaining the class for the whole hour or more. He usually bakes shortbread or makes tablet too. And he's even upgraded his black watch to Buchanan tartan now he's bigger too.

I had to laugh tonight when he was talking about songs - Anna sheepishly told us that when she was at nursery, aged 3, she had been made to learn 'Donald where's your troosers' and said she couldn't understand the lyrics. Given she was used to hearing Scots, I struggled to understand her problem, but given she couldn't read at the time, she had misheard the lyrics as 'Donald wears your troosers', so couldn't for the life of her understand where the blowing kilt came into it, if Donald was already wearing someone else's trousers! That made me laugh quite a lot.😂

A final comparison that I thought would be interesting is a map of my Scottish house and garden versus my Danish one shown to the same scale (2cm=20m) . The Danish one was the cheaper of the two, and in a country where salaries are significantly higher. So I could actually fit my Scottish house, the front and back garden and the garage on my current front lawn without it touching either my house or even the side lawn - even I wouldn't have believed that!

A walk through the history of our new home

A wonderful thing about Denmark, is that they seem to have photo-documented it from the sky in a significant amount of detail, as far back as the 1940s! That means that although I now simply live in a large white bungalow, I can see not only how my house looked when it was a working farm, but also what they did with the garden, field and outhouses. The amount you can zoom in is also quite amazing for the time. So here goes:

I've taken a current google satellite shot and drawn the boundary of our garden on it as a guide before uploading the older pics just as a starting point. 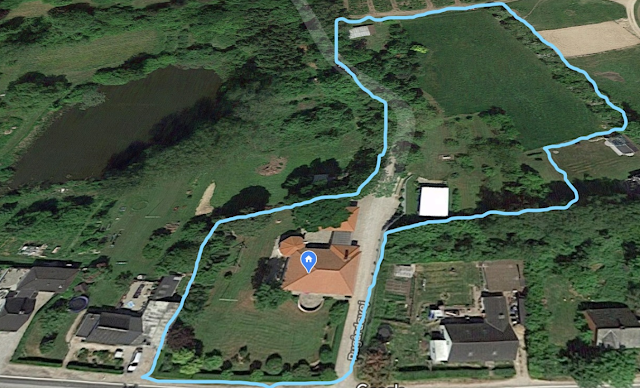 And here's a front shot from the schedule when we bought it in 2019.

So, the first aerial shot I found was from 1948, taken from the right hand side as you are looking at it on the photo above. 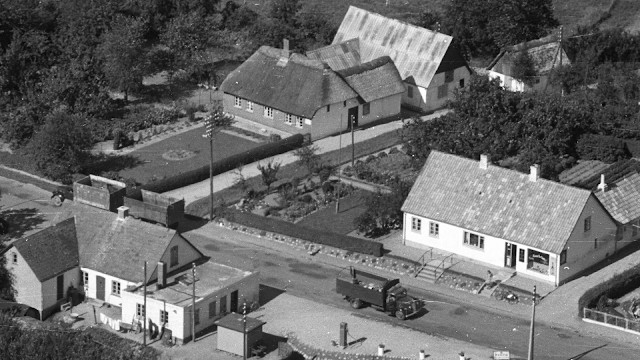 The house is a third smaller as the extension on the left hand side which houses our bedroom, Amaia's, the living room and the turret room had not yet been built. It had a sweet little thatched roof, a large outhouse and a small thatched garage where we now only have a little fenced-in bin area. The next door neighbour, which is simply a residential house now, seems to be the corner shop back then - now that would have been useful for a pint of milk! And across the road I can see a petrol pump too, which would also have been nice! Although the front lawn in our garden is grass, the majority of what we now have as a front lawn seems to be an orchard back then. What a pity that's gone, although we now have an orchard behind the house so maybe that was simply moved up.

The next shot I found was from 1949 and taken from behind the house. 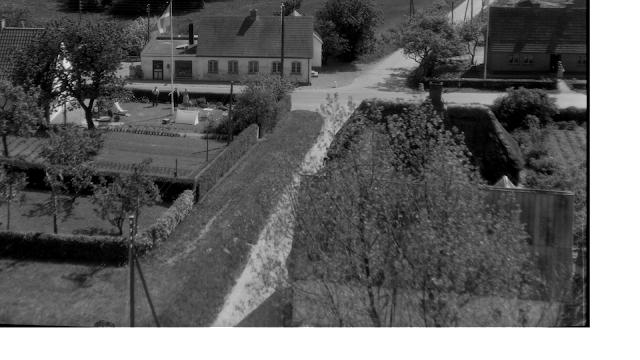 To a certain extent this one is less interesting as you can only see the back of the outhouse, the thatched rood and chimney but it is interesting to see that the garage across the road also seemed to be a shop back then. And it's sweet to see the neighbours, complete with celebratory Danish flag, out looking up at the photographer. I wonder if the tree in the foreground is the one we park beside today?

Skipping forward next to 1953 and we have an almost identical shot to the 2020 satellite picture above. Here's the outline but I'll include a larger shot of the same below. 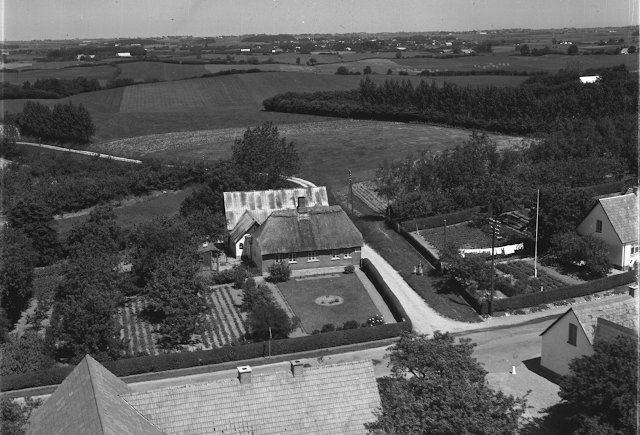 The barn at the very back of our current garden isn't yet there and the garage and tool room we have at the front of the field is missing too. The front lawn seems to be half fruit trees, half vegetables back then. And I wonder if the tree behind the outhouse in this is our wonderful old oak tree in an earlier iteration (see the big tree half covering our garage above).

1953 seems to have been quite a prolific year. The next shot from then seems to be annotated. 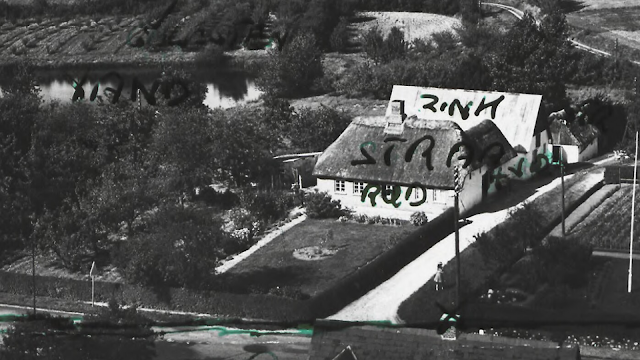 So our house used to be red brick on the front! And by the looks of this there was a little girl living here back then - she looks around 10 so she'd be 77 now! I wonder who she is! 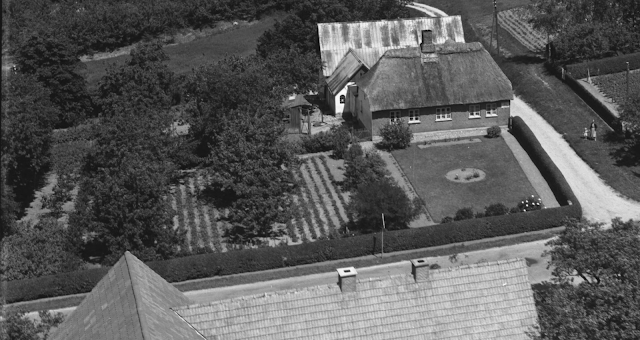 It looks like the little girl has an even smaller sister. This is the first shot on which I can see a water pump in the garden and a little shed. 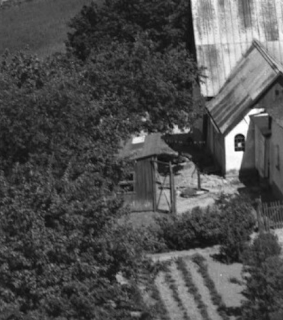 And here's the last one I found from 1953. It shows the neighbour's lake nicely and also our neighbour who lives up the lane - these days their house is only visible in winter when the trees are bare. 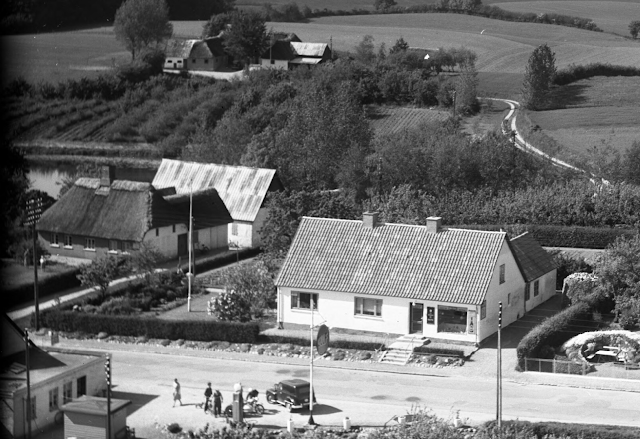 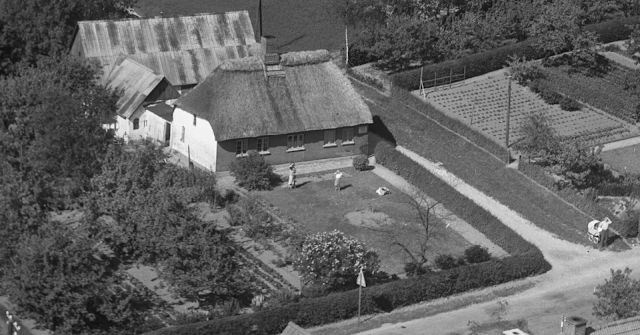 Now there's a baby in our house - isn't that a sweet pram going up our driveway?! This baby must be 65 now! A few more family members can be seen on the front lawn too. I swear the hedge is the same!😁

In 1956 they seem to have taken the first colour shots. Ironically the quality is slightly less sharp, but it is interesting all the same. This one seems to have been taken in winter which might account for the less bright colours. 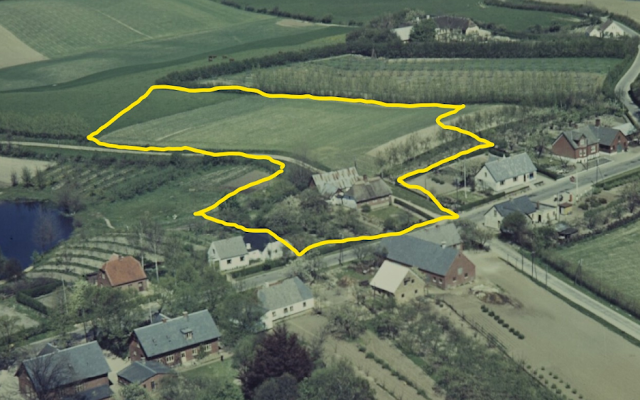 It seems the area all around the neighbour's lake was cultivated back then. You can see it better on the black and white one taken at the same time. 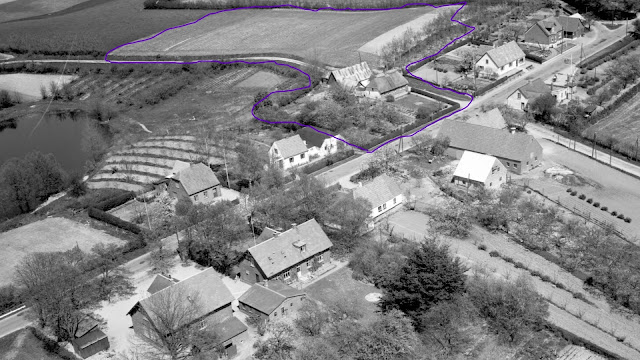 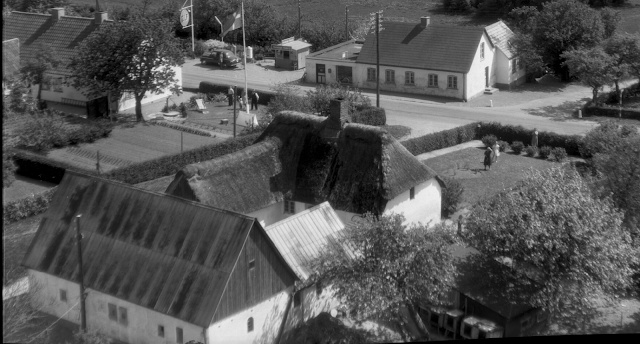 I like this one a lot. It is the first time I get to see the back. There is a little thatched chunk jutting out where I now have the laundry and shower room, and Léon's bedroom window is clearly visible and still looks the same. I presume when it was double glazed they made exact copies of the original windows, which is nice. The family make another appearance in the front garden too.. Who were they? I can also see some cages of some sort in the bottom right, where we now have the turret room. Are the chickens, rabbits or what?

Further afield I can make out that the garage across the road also had an ice cream stand - how sweet is that? This must have been a much more exciting place to live before it simply became a commuter village of Odense. Having zoomed in, I can see the sign reads Hesselager flødeis and on googling that I found how it must have looked close up. See this link. Nice car at the Gulf garage too! 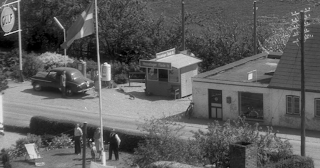 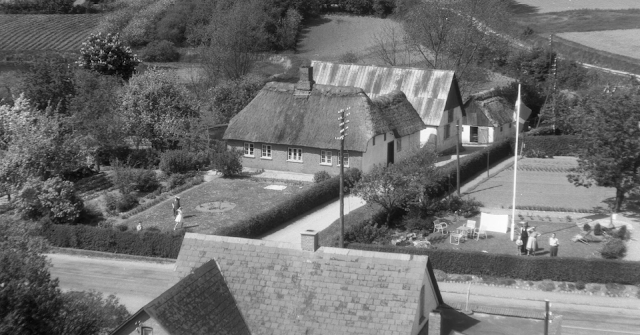 This is the best view of the right hand side and the little thatched garage behind - how I wish we'd inherited that too, it's so cute!

We've almost got to the end of what I have managed to track down so far, but here's a very friendly one from the family who lived here in 1961. 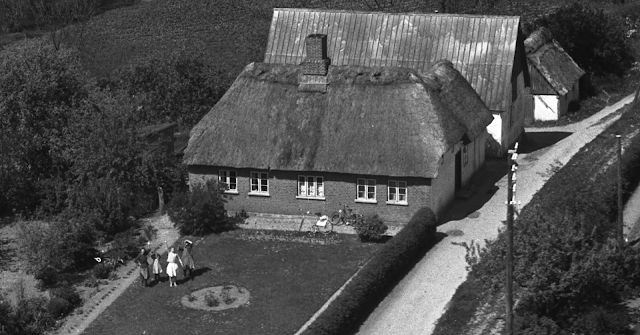 The only other photo I have managed to track down was from the ground, not the air, and dates from around 1985. Little had changed with the main house even then - there's no extension yet and it's still thatched, although it has now been painted to its current white instead of the red of the previous shots but already the outhouses and thatched garage seem to be missing in this one so I guess the working farm was no more by then. 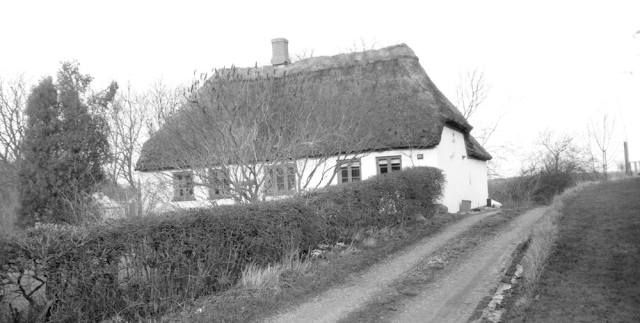 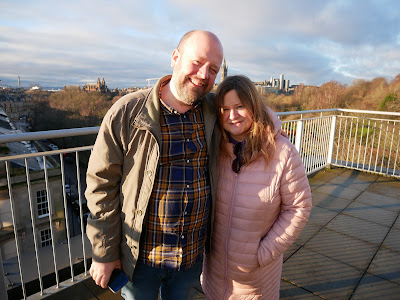 It was my birthday on Tuesday. Today I am 52 years and 2 days old. It is Thomas's birthday on Saturday. Today he is 47 years, 363 days old. So I guess that means today, together we are turning 100. At least that explains how my body feels most mornings when I wake up these days! 😂
Posted by Phyl at 1:50 pm No comments: