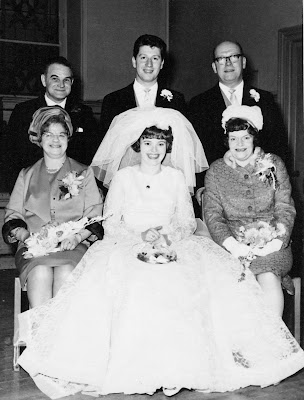 Here's a photo of my parents' wedding, 51 years ago. On the right of the picture is my dad's dad (William Buchanan) and my mum's mum (Jean Stirling). They would both have turned 100 years old this weekend, had they still been alive. That would have been quite a party! Maybe we should throw them one in their absence, or at least bake them a cake.
Posted by Phyl at 8:51 pm No comments:

Something that is important to me

Given my husband has worked here paying taxes for 14 years and his kids have UK citizenship, I am beyond appalled (though not surprised) that he can't have a say in his own future and that of his family. Thanks David Cameron for dumping EU citizens out of the Brexit vote.
Posted by Phyl at 8:45 pm No comments: 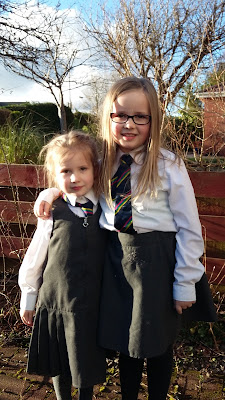 With Pancake Day on Tuesday, and Fastelavn last Sunday, I think Amaia has being hearing a little about Lent over the past week from various sources. Though not from us, as we don't observe Lent, I suspect she's been hearing about the concept of depriving yourself of something up till Easter.

Today she came in from school and announced 'I've decided not to eat chocolate till Easter'. When we inquired why, the answer was simply 'Because'. Fair enough, we left her to it. An hour after school, however, she asked if she could have a drink and a chocolate biscuit. Anyone who knows Amaia knows this was presented as 'Can I just have one last bar and then I'll give up chocolate'! Half way through a caramel Rocky, she reconsidered... 'Maybe I'll give up crisps instead.' Of course later again, walking past the crisp box she reconsidered that too! Finally over dinner, she came up with a real gem. 'I've thought about giving up chocolate or crisps, but I just like them too much, so I have finally decided what I'm giving up for Easter'. I figured she was cunningly going to come up with something she's not fond of such as cold meat or maybe sandwiches, but no she stunned us with. 'I don't like being cold, so I'm going to give up cold weather till Easter!' Good luck with that one in Scotland, pet!
Posted by Phyl at 10:50 pm No comments:

Driving to school today, Anna came out with a very sweet attempt at emotional blackmail! 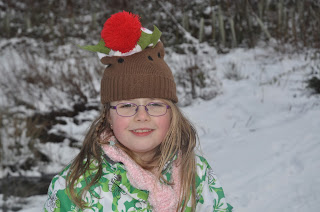 Anna: We had PE yesterday, mum.
Me: Was it fun?
Anna: (Sighing dramatically) Well, I really struggled, not like the others...
Me: Why do you think that was?
Anna: I think it had to do with sugar... their blood sugar.
Me: (concerned) What?
Anna: Well, Tuesday was Pancake Day mum, so they'd all had pancakes. We forgot to make some this year!
Posted by Phyl at 1:00 pm No comments:

Charlotte has been going by the surname Buchanan since she was about twelve but without her (absent) biological father's consent she couldn't change it legally till she turned 16 last month. Needless to say, when that date came, it was her top priority to finally get a passport and bank account that matched everything else that she had already managed to change over the years. 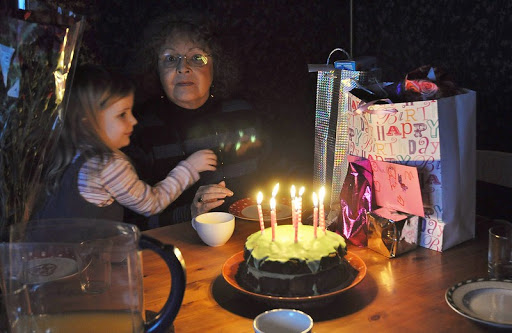 The younger kids have obviously overheard bits of conversations about 'I'm 16 now', 'I'm old enough to change my name' etc. So with the absolute clarity of a six year old, Amaia got it into her head that you had to change your name at 16! One day over dinner, I heard Amaia ask Charlotte (who, of course, she has only ever known as Charlotte Buchanan) if she had thought about a new name for herself. She suggested Sophie, then Holly (the two most common names in her class). Charlotte decided to have some fun with it and told her she was going to change it to Baby-Magic Buchanan. (When I was pregnant with Lots, Marcel was two years old and had insisted two things throughout my pregnancy - 1) that she'd be a girl (I didn't know what I was having) and 2) that she'd be named Baby-Magic!) I couldn't guarantee the gender but there was never any way she was going to be Baby-Magic. When she turned up and we named her Charlotte, Marcel cried for two days solid. I even asked if he wanted to choose between the final two names on our list: Charlotte and Élodie. Nope, he still wouldn't talk to me, feeling I'd betrayed him!

So the surname changing came and went without Amaia noticing any change in Charlotte's name... but it is still leading to some rather odd questions and conversations. Tonight I was lying in the bath minding my own business when Amaia burst in: 'Mummy, see when granny was six? What was her name?'
Me: 'She was called Ann, even when she was six'
Amaia: 'So did she change it back then?'

This is starting to get surreal!
Posted by Phyl at 10:56 pm No comments: 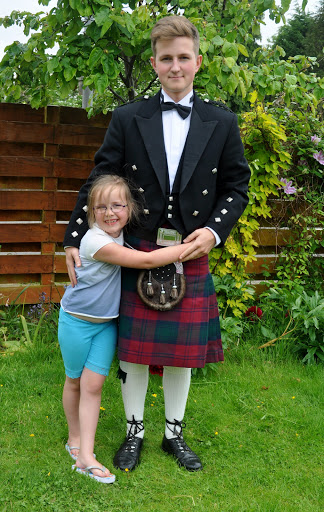 I had a very sweet conversation with Anna yesterday. She's eight now and becoming aware of boys. She came in and announced: I think one of the boys in my class likes me. He keeps following me about and talking to me, yuck!
Me: Do you not like boys, then?
Anna: Well, I don't like him! He's boring and just not very clever. When I grow up the only kind of boys I will be interested in will be nice, clever, good-looking, kind boys... just like Marcel!