Ok, what am I doing wrong? 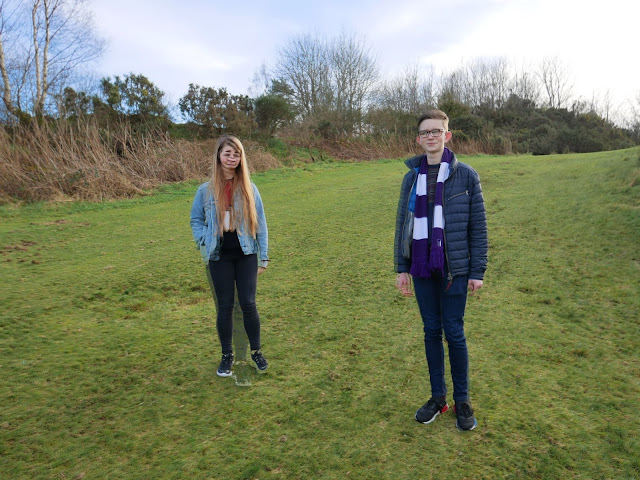 Ok, so what is it I'm doing wrong? I'm way too snowed under at the moment to read the instruction manual or watch the tutorials. I presume it must be stuck on some kind of burst mode but I just need to know how to switch it off, otherwise I'm going to be knee-deep in photos of seriously disturbing alien weans! (It's a Panasonic Lumix GX-80, for what it's worth!) 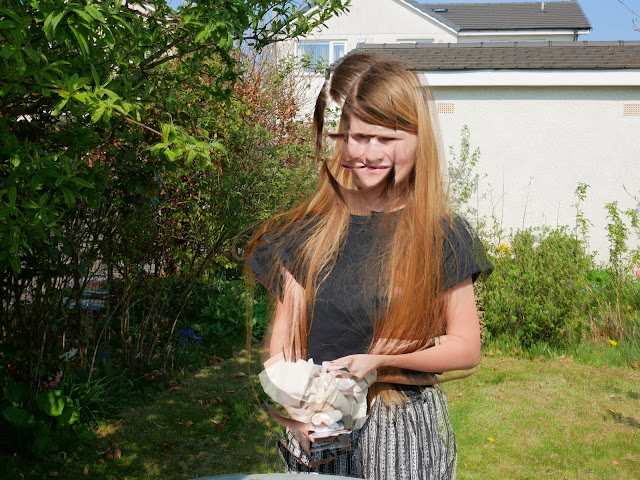 Isn't this a pretty photo of Thomas's new car? I took it on the beach at Flyvesandet the other day. 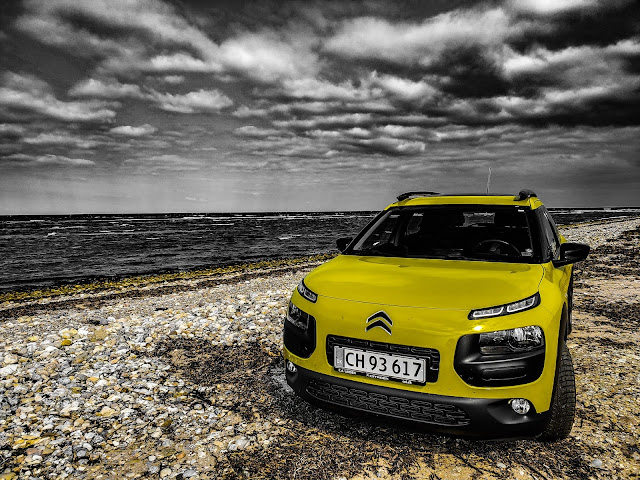 Having lived in the west end of Glasgow for many years, I thought I knew what basement flats looked like... These, in Hamilton Park Avenue, are fairly typical... 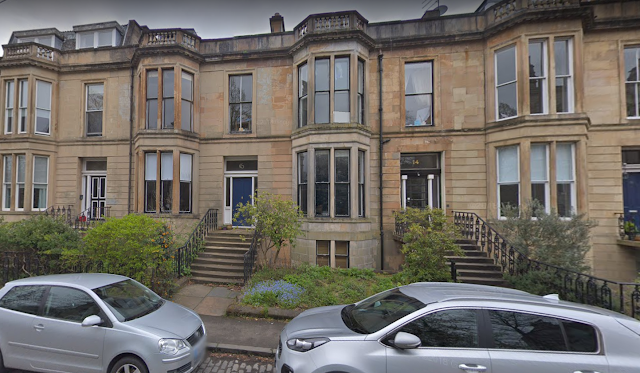 But this year Marcel has got himself a main door flat in Edinburgh, complete, he boasted, with private front garden. The first time I visited was at night, so I didn't notice the two 'holes' in his front garden, but last time I was over, they fascinated me enough that I had to have a photo. What a strange set up - both for the downstairs inhabitant, who can't be getting much light into their house, and to Marcel's flat - it just takes returning home at 3am a little drunk, and you could actually fall a metre or more into a hole in the garden and come face to face with your neighbour. I wonder who thought this was a good design!? One hearty laugh on that bench and you could end up literally six feet under! 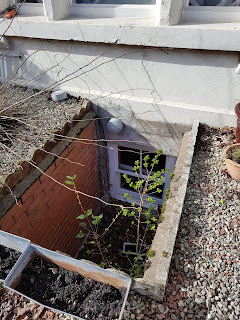 Maybe we're mad, but we need to be us

No one has explicitly said it, and many of our more politically clued-up friends actually think we've called it correctly, but I'd say in general the vast majority of people I meet think we're overreacting to Brexit. Maybe we are, but only time will tell and time isn't on our side.

The general themes I hear again and again, especially now I have officially announced that we're leaving is 'surely, it'll all work out ok, isn't it worth just waiting to see?'.

I've had several interesting conversations over the last few weeks...

One with a EU national friend, who lives here but hasn't looked into any Brexit implications because he has a job so it is 'bound to be fine' (for him, his foreign wife and all their kids!) He looked somewhat shocked when I said we were leaving and pointed out that under the no-deal scenario none of his current rights were guaranteed and yes, he has a job, but should he lose it at any point, what would the implications be of living as an unemployed EU national in the UK post-no-deal Brexit? The simple fact that banks, landlords, the NHS etc are yet to receive any guidelines on how to deal with the remaining EU nationals going forward should there be a no deal should be enough to set the tiniest of alarm bells ringing, but for the most part people like to assume the best.

Another conversation was with an acquaintance who said it was bound to all get sorted as she couldn't leave with her foreign spouse for the EU as she was currently undergoing some medical treatment. It is true, she needs to complete that, but it is definitely not true that that means everything will work out ok in the end!

Two friends' husbands have lost their banking jobs in the last fortnight to 'moves to continental Europe, just in case'. If the government signs a deal, these jobs aren't coming back and the friends' husbands and their newly unemployed colleagues will need to fight over the remaining banking jobs, in a sector that is not exactly recruiting at the moment.

A huge amount of economic damage (and damage to our reputation as a trustworthy business-oriented country) has been done even if the UK cancels the whole thing tomorrow. Foreign companies are scared to invest with this level of indecision and uncertainty, university lecturers who've put the wheels in motion to leave, will continue to do so until things have fully calmed down, researchers will carry out their work at EU unis in the meantime just in case things go a bit mad again - they just don't need that hassle... 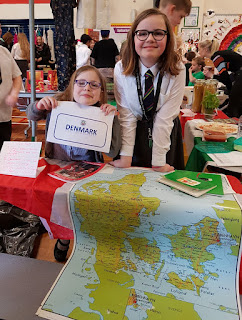 But I think even more than the economic uncertainty, the thing that is making me most uncomfortable is the wave of right-wing nastiness this whole process has unleashed.

For twenty plus years my kids have walked round ASDA and the likes speaking a different language with me or with their dad, feeling a wee bit special and a wee bit exotic, proud even. They are Scottish but they are also something else. If you don't see their names or you only speak to them in English, you have no inkling they are different. The older ones have won prizes at high school for coming top in English, so living in a different language at home doesn't exactly have an adverse effect. They are not less than Scottish, they are more than Scottish. That has universally been met with intrigue, excitement and positivity. Just last week in school my girls were asked to host a Denmark stall at the school's diversity day. Here in Scotland that is still an acceptable thing to celebrate, but for how much longer? The UK is no longer the country it was. I am beginning to feel that I should warn my kids against showing their foreignness as explicitly. On the school trip they do to Blackpool at 12, I might feel compelled to tell them they are best not to speak their other language out loud. At some point in the future will we reach the point where they might be better changing their surname from Buchanan-Widmann to Buchanan? If that is the case, then this is not their country. My family thrives on its diversity and having to hide it means we will no longer be us. As the UK becomes smaller and more insular, I can't help but feel we will become second-class citizens. I want to feel excited in the future if my kids bring home partners from other cultures, countries or religions, not frightened for them.

When we reach the day that I lose my EU citizenship, and with it my right to freedom of movement, it will be too late to wish I had jumped ship on time. Nothing will bring back my ability to make that choice, so that is why we are doing what we are doing. My kids aren't just British citizens, they are citizens of the world, or of Europe at least, the kind of people our esteemed leader refers to as citizens of nowhere. Hiding who we are so we are allowed to stay in a country where fewer an fewer foreign people come to study, do research, invest and live is not an option.

My mother has eight grandchildren: 3 who are exclusively Scottish, and 5 who are dual nationals. In the future will these cousins be separated into first-class and second-class UK citizens by their passports or surnames, despite the genetic link?

But even once we're living abroad, I still hope for my country and for future generations that it can see sense as once again turn to look outward and see what it can learn from cooperation and integration.

Conversation of the day...
Léon: I have to say, Anna has been really pleasant today.
Me: Anna went to Akshara's house before you woke up and is still there!
Léon: Awwwh, really! That explains a lot.

What a doughball😜
Posted by Phyl at 12:17 pm No comments: 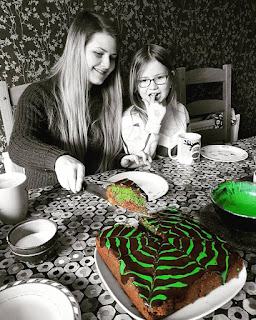 Charlotte has long since surpassed me on the baking front, but I have to say this pandan cake she rustled up yesterday has to be her most moist and delightful offering yet.

I thought it looked nice colourised so am sticking it here for posterity!
Posted by Phyl at 12:16 pm No comments: