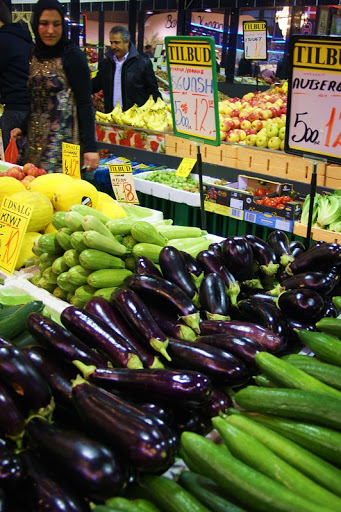 I don't think I ever tasted aubergine as a child (it was Glasgow in the 70s after all.) But from the day I left home at 20 to live in France I decided that something that beautiful and shiny had to taste wonderful. The problem was that is was the late 80s and there was no Internet back then to check what to do with one. Unperturbed, I took to buying them at the market in Besançon and I'd then try to make something delicious after a hard day at work. My then boyfriend - he who shall not be named (yeah the ex) - would come in in the evening and look in the pot to find aubergines and garlic swimming in a watery fashion in a tomato-based sauce that was destined for the top of a plate of spaghetti. He wasn't over-excited and to be honest neither was I. Try as I might, they always tasted rubbery and watery.Boiling them in stock and liquidizing them into a soup was also fairly bland. They even squeaked in the liquidizer! So slowly, over the years I threw in the aubergine towel.

Then I met my current husband - who had lived in Georgia. (Ex-USSR Georgia, not US Georgia!) In Georgia they eat a lot of aubergine and they know how to cook it. In Georgia when you board with a family, they teach you how to cook it. What Thomas can do with an aubergine is almost orgasmic - (I'm still talking cooking!) I could live on aubergines alone for weeks on end, if only he's doing the cooking - it's all in the salting technique. Divine! His აჯაფსანდალი is to die for!

So I was right - something that beautiful does taste as good as it looks... eventually.
Posted by Phyl at 12:04 am