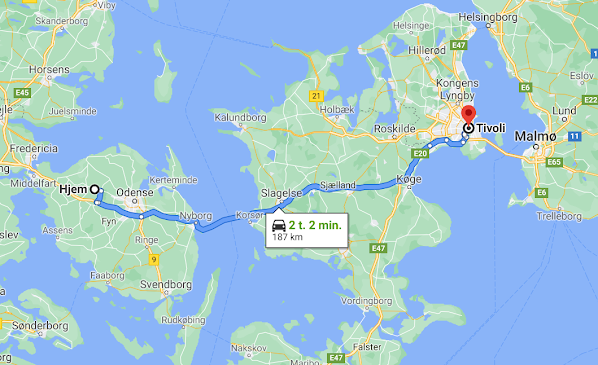 As I mentioned last week, Léon is finishing the equivalent of s4 here, which means leaving middle school and starting Gymnasium (a three-year senior high school where he will study from 16-19). From back home, I fully remember how school trips were policed. Teacher friends are often expected to follow older pupils' movements using iPad tracking or similar, and younger ones were never let out of their sight. Here, however, they are more into empowering and trusting kids by this age. Today is a good example of that. The plan had been for the whole of Léon's year to go to Berlin for a week to celebrate this transition, but Covid of course put the kibosh on that. Trying to find a nice way to celebrate, they compromised on a day trip to Copenhagen (190km away) leaving by bus this morning at 7am, returning at 10pm with a number of exciting stops in the capital plus some alone time to discover it by themselves. Then tomorrow they have a day of water sports planned around 25km from home. For the first trip they were given the instructions 'Be at school by 7am, because that is when the bus is leaving... if you miss it, find your own way to Copenhagen (a bus and train) and ring us when you get there and we'll meet you. The bus home is leaving at 8:30. Again, if you miss it, find your own way back to school, you're big enough. And for the second trip - the instructions are simple - it's only 25km away so find a bus, or cycle and meet us there are 10am! I can't imagine a Scottish school telling 15 and 16 year olds this, and meaning it, but what the kids get out of it is a sense of responsibility for themselves and an ability to get themselves out of a jam. These are both traits they'll find useful as they leave childhood behind. And better still, Léon has actually texted me from the bus so I know he found his way back to it on time. Result!

Today is Léon's last day at Havrehedskole in Morud. The way the education system works here in Nordfyns kommune is that you go from 1-3 to a nursery, then from 3-6 to an upper nursery, then from 6-13 to the primary school in Veflinge, thereafter from 13-16 to the middle school in Morud and from there you go on to 3 years of Gymnasium (grammar school) or a more vocational or technical education depending on your area of interest/ability. Léon decided to apply to the regional grammar school and will find out today whether he did well enough on his grade point average to meet the conditional entry offer they sent him back in spring. So today is sort of like the last day of s4 in Scotland but in a system where s5, s6 and a non-existant-over-there s7 are in a different college-like setting. I think back to the very formal graduations at home and am amused by the very different but equally memorable way they are marking this end-of-an-era event here today. Many of the kids have been together for 15 years, Léon only joined in 2019.

So today they have asked his year to come in in fancy dress bringing as many sweets as they can carry. The whole year meets up together for a banquet breakfast which they eat together for most of the morning. After that they visit the lower years in the school in Morud where they throw sweets at the kids and show off their costumes. Thereafter, they ride on their bikes to the feeder primary they came from in the cluster and shower those kids with sweets too, and again the feeder nursery is included. So every kid in the district is getting to celebrate their leaving. They then have the afternoon off so they've all decided to go down to Odense and spend the afternoon in the city before returning in time for a barbeque and drinks session from 6pm to 4am complete with boombox.

Léon decided early on he'd go as Braveheart as he is always the centre of attention around town when he drags out his kilt. This time he's gone further buying face paint and a Mel Gibson mullet wig! A friend is lending him a sword and shield but he's picking that up on his way to school. So at 7:30 this morning, this was the sight that left for the school bus. I thought he was going to cause a crash as I could see everyone who drove past was looking sideways rather than ahead! Of course, the fact that his last day now coincides with the Scotland-England Euro 2020 match now means he's doubly pleased to be dressed in this fashion and I suspect his trip to the city probably includes going past the Irish/Scottish pub in the centre! I'm dying to see the photos as I know his mate is going as the Pope; they'll make quite a pair!

Anna is bracing herself for being the talk of the school as she hasn't been in the same school since Léon last turned up like this and although Amaia is claiming to be embarrassed by him, she did message me from school asking for photos to show her friends for when they turn up there, so I think she's secretly proud!

I have to say, the wig is maybe a wee step too far though!😂 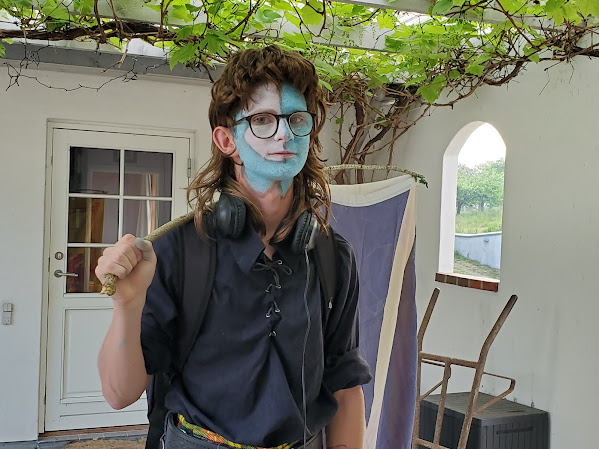 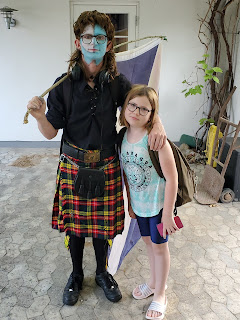 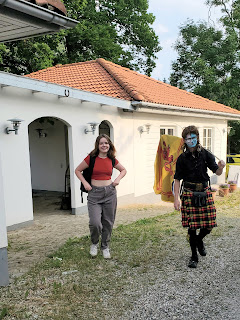 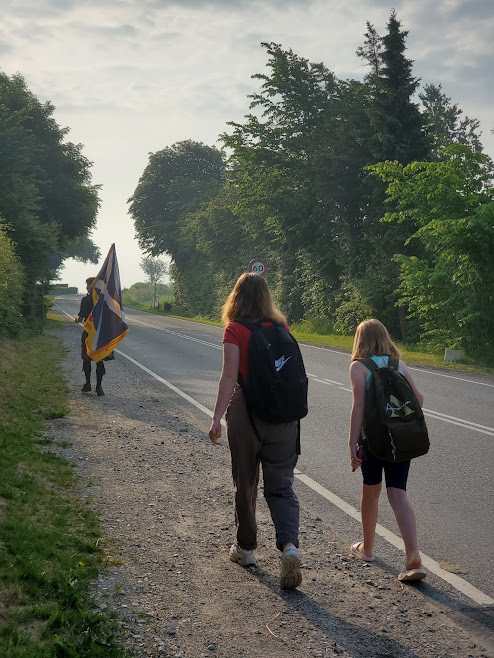 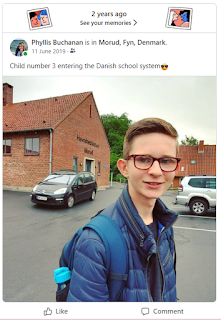 Two years ago today my kids entered the Danish education system with a decent knowledge of passive Danish and the ability more or less to hold a conversation with their grandparents. They had spent one summer holiday in Denmark in the lives. They were bad at reading it and worse and writing it... Yesterday Léon got back the results of his school leavers' exam (roughly equivalent to Nat 5 in Scotland). That Léon got the highest mark in his class in written Danish is beyond amazing. So proud 🙂 (The wee bugger also spent the whole day baiting the native Danish speakers in his class in the most tongue-in-cheek fashion - figuring it was a once-in-a-lifetime opportunity! hahahaha)
Posted by Phyl at 11:14 am No comments:

Watermelons? I don't think so...

I had to laugh yesterday when we were shopping for dinner in Rema 1000 (a Danish Aldi-like supermarket). The sheer look of indignation in Amaia's face, even with her mask on, at the size of the melons they were claiming were watermelons was priceless! 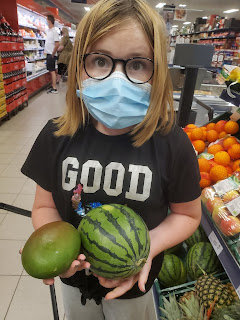 Amaia has been going to Tuscany every other summer for the whole of her life (as her grandparents retired there). And to her mind, this is an average watermelon. Picking these Danish ones, in her eyes, was tantamount to infanticide! 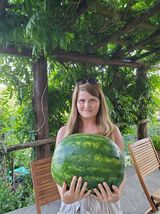