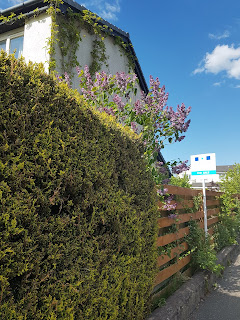 I'm starting this series of blog posts the week the house goes on the market, but I expect I won't be hitting the 'publish' button on all the instalments till after someone has made an offer and the money is safely in my bank account! I obviously won't bore you with the mundane but will pick out the notable elements of this process and give an anonymised account of some of the more memorable visitors to my abode. 😉 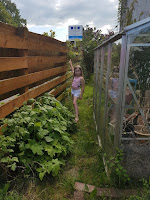 It's taken the best part of three months to tidy, de-clutter and touch up twelve years worth of up to seven inhabitants. Thomas has been away for half that time so single-parenting five kids who are in varying degrees of meltdown about our move, while DIYing my way through the first month after my consultant has okayed me lifting something heavier than a kettle, while moving box after box out to storage or the local dump haven't been my favourite pastimes. Of course, it also all coincides with Marcel's finals, including the dreaded dissertation, and Charlotte's first year uni exams. Joy!

The house is now tidy but a bit odd. We're two couches and four dining chairs down, we've no books left, only a kindle and no TV, or any such thing for rainy-day entertainment! All we have left is a travel iron, so everyone's looking a bit bedraggled! Last week I had to give in and buy a refurbished mini-hoover or I could not have let anyone in without handing out free antihistamines for the dust!

After every meal I now run about like a mad thing getting dishes into the dishwasher and crawling under the table with a brush and pan, just in case. Viewers invariably want their viewings to coincide with meal times so the kids are getting very late, very fast and preferably so-bland-it-doesn't-smell food - kind of the opposite of our family norm, where the majority of communal time is spent round the dining table, with spicy and pungent offerings. I suspect we will soon bore of pizzas and pesto pasta.

The estate agent has advised us to tidy all surfaces to make everything look more spacious so a lot a unnecessary time is being spent on hunting through drawers to find where we last hid the oven gloves, salt, diluting juice and all such things that usually happily stand about in full view. I've just found a half eaten curry I'd hidden in the oven when a viewer turned up early the other day! Yeuch.

It's nice living clutter-free. I miss some of my stuff but surprisingly little of it... Amaia came out with the rather cutting, but to-the-point remark 'next time we own a house can we make it look like this while we're living in it, rather than for the other people!', the other day and I felt a bit like a 9-year-old child who was being castigated by their 51-year-old parent rather than the other way round! But she has a point - going forward we need to go simultaneously for more space and fewer belongings. Yes, Thomas, I'm talking to you, hon!

Thinking back on when we sold the flat in Garnethill in 2007, I have no idea how I managed to keep up this level of tidiness for the four months it was on the market, especially given I was five months pregnant when it went on! Having been told it would sell in less than a week and for a crazy price, Northern Rock collapsed a few days in, starting the financial meltdown in the UK. Back then, the norm was to buy then sell when you were in a sought-after area such as Garnethill, Newton Mearns or similar. I still recall how it felt to be nine months pregnant with three kids and two mortgages. We had £35 left at the end of the month once all our direct debits went out - less than a tenner a week for five people, with a baby on the way! I'm surprised we got through that!

So this time I'm holding my breath that something Brexit-related, or for that matter Boris-related doesn't land me in that situation again, minus the baby. Moving country and starting from scratch is stressful enough without anything else being thrown into the mix...

We're selling our house at the moment in a bid to escape the asylum before Brexit bites, so feel free to share this link to our house :-)
Posted by Phyl at 11:22 am No comments:

I woke up early... one of the downsides of middle age, I guess. Having exhausted all other options, I stuck my music on shuffle and was lying in bed listening when Bob Marley came on singing Could you be loved. Bob Marley never fails to make me smile. I remember spending my teens listening to Exodus on my cassette player, but mostly he makes me think of one particular story involving my dad. Given today is the 7th anniversary of the day we lost my dad, I thought instead of feeling sad, I'd share a wee story that still makes me laugh 30 plus years on.

Dad used to drop me in Glasgow when I was a uni student and I'd either walk up to the West end if the weather was fine or jump on the tube. Every morning he'd listen to the breakfast show on the radio. For an intelligent man, Dad was known to come out with some mind-blowing howlers at times. That morning No Woman no Cry came on and he listened to it quietly, paused and then said quite seriously: 'I never understood that track'. Puzzled, as it seemed fairly self-evident to me, I asked what he found confusing. He replied 'No woman, no crime. I just don't get it!' 😂 I guess he wasn't quite as tuned in to the Jamaican accent as the younger generation. Lol.