It's why I love him 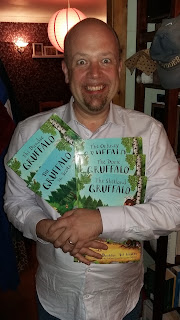 I was always fascinated by language. Even before I was taught any French or German at school, I used to spend my weekends at my grandparents' house analysing his Scots (Did he just ask me to pit ma jaiket in the press? WTF is a press???) and her idiosyncratic idioms (Jesus wept and tore his waistcoat... or was she actually saying Jesus wept and Tories' waistcoat? - well it was the late 70s, so how was I to be sure if she was discussing Maggie Thatcher or damage to clothing?... I was never really sure Jesus had a waistcoat but I was also too shy to inquire, given my heathen upbringing... It did occur to me occasionally to actually ask my grandparents what exactly they were talking about, but he'd have told me to haud ma tongue and she'd have rolled her eyes and muttered something odd about my arse being in parsley, so instead of asking, I sat in my own wee bilingual Scots/English world trying to make some sense of it all. I religiously learned all my Gramps's odd words for everything, though of course, I never used them. I learned at a very young age that young ladies from Newton Mearns (in the 70s) weren't allowed to say dug or semmit.

So when I found my first husband, a native French and German speaker, I thought I'd hit the jackpot. I forgot that just because you grow up speaking other languages, you are not necessarily interested in languages. When he got a programming job in the dictionary company where I worked not long after we married, I was more than disappointed to realise he had no interest in the linguistic side of his job whatsoever. To him, language was simply a communication tool. And when the kids came along, he'd no idea how to make them bilingual, despite his own mother speaking to him in German when he was growing up. I was the one who read up on bilingualism and spoke to the kids in French to ensure they were fluent, albeit with my flaws and accent. Anyway, at least I got to speak French at home for the next thirteen years, so that made up for it for a while.

Then one day a real language nerd dropped out of the sky and into my world. Someone (I still don't know who, though I thank them from the bottom of my heart) decided the best person for me to share with after an office reshuffle was the great Dane (as we affectionately referred to him behind his back)! He was the kind of language nerd who lists 'Danish, English, German, Esperanto, Georgian, Russian, Czech, Basque, Swabian, German, Japanese, Italian, French, Dutch, Nynorsk, Swedish, Sanskrit, Spanish, Scottish Gaelic, Yiddish and Scots' under languages he speaks on his facebook page. Of course he hasn't broken Scots up into Doric, Orkney and the likes and he hasn't mentioned things he only knows a wee bit of such as Old Norse, Icelandic, Ancient Greek, Latin and Mandarin Chinese, etc. He never ceases to amaze me when he picks something up in an exotic supermarket and can actually read text printed in Hindi out loud... or at least that's what he claims he's doing... maybe he's just making it up to impress me! Hmmm, that never occurred to me before! He lives and breathes language. When we watch programmes like Trapped, he actually pauses it to explain genitive forms of peoples' names to me and we both giggle in excitement when we understand bits from other Scandinavian languages we know better. We close our eyes and see how much we can follow without the subtitles. Our winter Saturday nights are invariably spent watching something foreign together - I'm not sure we've ever watched a movie or series in English!

And now he's gone and bought all the translations of the Gruffalo for us to analyse together in bed at night. I can see the winter stretch out before us as we look at every nuance of the words for an owl, or the woods or even the boring old definite articles. I know that isn't probably most people's idea of fun in the bedroom... but maybe we just both found the right person at last, or perhaps just the only person that could put up with each of us. (And it isn't the only fun we have - we're not that old or sad yet!)

I guess I'm just in a rather pensive mood today as I am celebrating ten years and a day since I moved into his flat. Ten years ago today I woke up to the first day of a new life. Did I make the right decision back then? Yes, I made the perfect choice, for me, anyway! 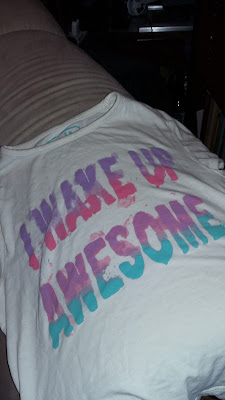 There's nothing quite as acerbic as a smaller sibling!

Anna bounced down wearing this T-shirt earlier. Amaia read it slowly, shook her head and stated: I'm not sure why you're wearing that because you don't, you wake up moany!
Posted by Phyl at 11:28 pm No comments: 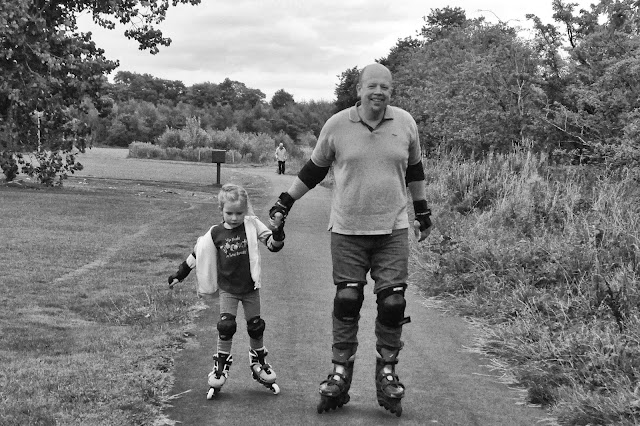 Today Thomas and Amaia went out rollerblading together. Amaia is just learning so wanted me to take photos. Afterwards, as I was uploading them to my computer, she crawled up onto the bed to watch. I decided to edit one to black and white for fun. The original was fairly bland and colourless, I thought... But kids have a great way of putting you in your place:

'Oh that's nice, mummy! Are you just making it black and white because you're more used to that because that's how photos looked back in your day?'
Posted by Phyl at 1:03 am No comments: