I've never been a fan! 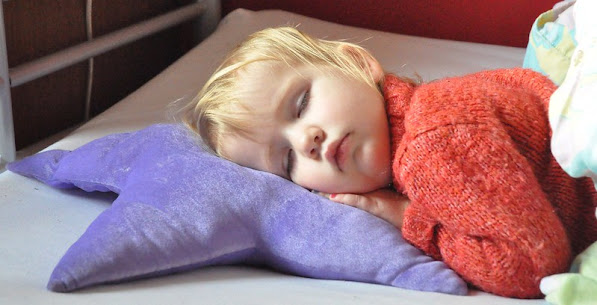 Amaia has been a great sleeper since she was about one. I can honestly say I can't remember the last time she (or for that matter, any of the others) turned up in our bed. She's a content wee soul without a worry in the world... that was until someone decided to teach her about religion!!! This morning around 5am, she turned up in our room scared witless and squeezed in between us. Happily, she calmed down and went back to sleep and given how small she is, we didn't bother to bump her back into her own bed. By this morning, I had completely forgotten to get the reason behind it all out of her and off she went to school. Over dinner, I suddenly remembered what had happened so asked what had got her so scared.
"I had this horrible dream someone was doing that thing to me that they did to Jesus!"
"What? You dreamt someone was crucifying you?"
"That's it!"
Poor baby.
Posted by Phyl at 10:53 pm No comments:

Celebrating the lack of celebration 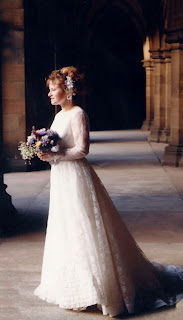 Today, in some parallel universe, I am celebrating my silver wedding anniversary! Even writing that down seems insane as I don't feel old enough to be celebrating twenty-five years of marriage, but then again, that was probably a great part of the problem. I am not old enough to be...

By 1991 I had been seeing my boyfriend for six years. Six whole years! We had travelled Europe together, lived in our own little flats in France together and studied together. When you are 23 years old, six years is a sizeable chunk of your past, and it's an even greater part of the past you have memories of. Any doubts I might have had before my big day were quashed by the knowledge that I had invested so much of my past in that relationship, that it would be madness to start again. After all, hadn't my own parents married even younger, hadn't my mum been 23 when I was born? And my husband-to-be was 27 so we were a fine age... I loved speaking French, I loved France and French culture so I'd have been mad to turn away the opportunity of being married to someone I could speak French to all day and all night. I was even getting an exotic name in the package. It was perfect... except it wasn't. I think more than anything I was in love with an idea but my greatest mistake of youth was that in looking backwards, I forgot to look forwards. Yes, six years was a large investment, but the sixty I had ahead of me should have set alarm bells ringing. I just didn't have the life experience to hear them.

Of course, if I could talk to 23-year-old me I could not advise against it because the children I got from that marriage make up half of my life today, but let's just say that if my own kids suggest marrying at 23, I will be first in the queue to suggest living together for another six years first!

If my marriage was underwhelming and lonely, my divorce was spectacular in its bitterness and has, by today, reached a point I would never have chosen to go to myself. So today I will celebrate thoroughly the fact that I now live with my best friend, a man chosen when I'd reached the right level of maturity to commit my life to someone, and with my large blended family and I will not regret that other universe for one second in time. 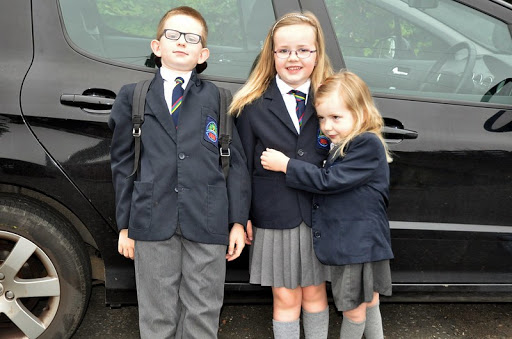 Fed up with always having to wear her dreary uniform, Amaia sweetly asked this morning: 'When's the next dress if you please day, mum?'
Isn't it amusing how slipping up on just two letters can change the meaning so much?! Lol.
Posted by Phyl at 11:56 pm No comments: