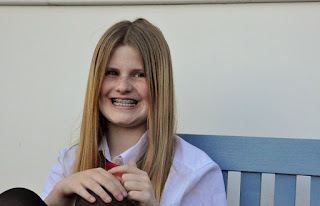 Charlotte had her braces put on today. Unlike her brother who has a tiny mouth with no space for his 28 teeth, so needed four taken out, Lots has a huge mouth with lovely straight teeth. Unfortunately a routine x-ray showed up that 4 of her adult teeth were missing. Of course, at first the dentist suggested we just leave the baby ones in as they often last to age 35 with enough care and attention. I could see the thought behind that - when her four baby teeth fall out in her thirties, she'd have to pay them a fortune in dental work to plug the four huge gaps. So I suggested that if we took them out and closed the gaps then she'd maybe even have room for her wisdom teeth when they come through and the nice orthodontist agreed. 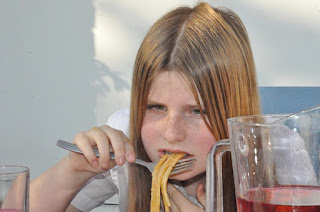 However, twelve hours in, with sliced gums and unable to eat she's beginning to question my logic and saying the baby ones might have been a comfier option. I remember from autumn 2010 (when Marcel's were put on) that this is a passing phase. I hope I'm still around when she hits 35, to point out that had I not taken this decision today she'd be forking out the equivalent of a grand or more at that point rather than using it on childcare, holidays or whatever her needs are then! She'll thank me then I'm sure.
Posted by Phyl at 12:16 am