I've been thinking a lot about IBS recently and researching it again. It's not because I'm hitting an age when I'm supposed to start talking incessantly about my bowels, but more because I never really do, talk about my bowels that is... Talking about your bowels doesn't tend to increase your friend numbers! The research is more to do with self-preservation.

No one who reads this blog is likely to have an inkling, given my reticence on the subject, that IBS plays a huge role in my life. I had my first run-in with it when I was still at uni in the 80s. All would be fine, then suddenly about once a month, I'd wake up bloated, in pain and unable to go to the loo. It would take a good two or three days of being extra careful before things would generally right themselves and I'd breathe a huge sigh of relief, well until the next time. And so that was the pattern I lived with through my twenties and thirties, some years worse than others, but on the whole bearable. Whenever things would get really bad, I'd be sent off for the usual, coelic and Crohn's testing, barium meal, endoscopy, colonoscopy, CAT scan or MRI and then I'd be told - 'Don't worry, it's just irritable bowel syndrome.'

Then it all changed. I contracted the worst bout of the winter vomiting virus in my life in the winter of 2012. I actually felt like my insides snapped. Sometimes I think they did. I woke up the next morning with my IBS playing up and assumed it'd all be back to normal in two or three days, it wasn't, and I'm still waiting... Every single day since winter 2012 has been marked by galloping indigestion, bloating (usually about 2 sizes over the course of a day), a feeling as if someone is sticking a red-hot poker right through the upper half of my stomach, lower back pain, muscle spasms in my intestine, an inability to go to the loo, exhaustion, need I go on? Interestingly, I recently discovered most sufferers can trace the beginning back to a viral/food poisoning episode.

The funny thing is - when you have these symptoms once a year, you take a sick day and lie in bed trying to get over them, but you can't do that when every day is a sick day, so I fully suspect those who suffer from IBS are probably amongst the workers who take the fewest sick days.

Anyway, I'm not looking for any miracle cures (unless anyone happens to have one) or sympathy. What I'm actually on to suggest is a change of name... You see irritable is just wrong - it's kind of like 'my baby's a little irritable today...' And that makes people think it is a minor inconvenience. If I had a pound for every doctor who has told me 'Don't worry, it's only IBS'... What sufferers actually need is a GP who happens to suffer from it! Irritable trivialises something that is actually quite difficult to live with. For starters, you can't wear clothes! That's a bit of a problem in a climate like Scotland. Anyone who thinks I tend to spend 85% of time in leggings because I think I have the figure for them, think again! Even the elastic in tights irritates my insides, so it's leggings all winter, dresses in the summer and pain whenever I have to dress formally for a business meeting. Then there's food - most self help books tell you to follow a low-FODMAP diet - ie eliminate these (see the lists with the reddish background) from your diet, ie eat as if you are a lactose intolerant coeliac sufferer who doesn't like spice, coffee or anything fried - that doesn't leave you with much scope! You also have to try to keep your stress levels low - it's not like my life has been in anyway stressful for the last decade, is it? (Did someone say Brexit?) It is physically and emotionally draining.

Or in fact, maybe we could drop the word 'bowel' from it too, then sufferers might set up self-help groups instead of assuming the subject should be taboo!

I've never actually used this emoji before, but it seems kind of appropriate!

Restored to his former glory - phew. 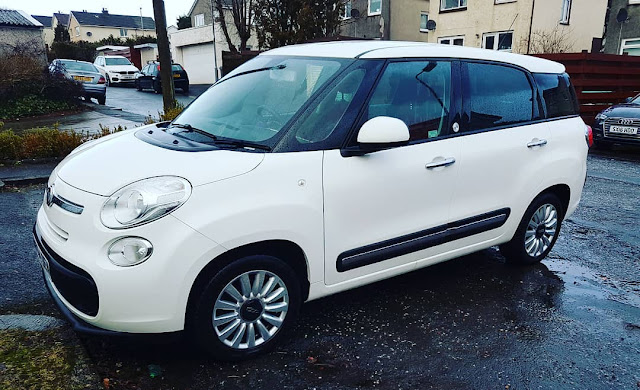 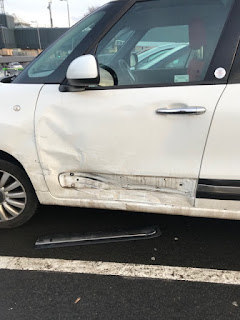 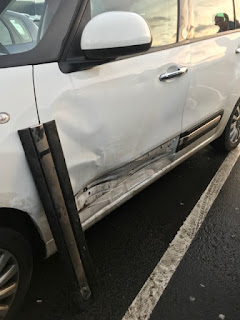 So there I was (last week, before the snow!) minding my own business in the shopping centre car park, stopped in a long line of maybe eight stationary vehicles waiting for the front car in the line to turn into their chosen parking space when I saw a black Ford Fiesta backing out of its space cautiously. Charlotte was in the passenger seat and she turned to me and said 'I don't think they have seen us, mum!' I had come to the same conclusion at the same moment so tooted my horn to alert the driver that my Fiat (and the other eight cars he had seemingly failed to notice) were at his back. I expected he'd stop at that point but instead he pressed his accelerator fully down to the floor and flew at the side of my stopped Chuggy at a speed I had never seen a car reverse at!

Charlotte screamed, expecting the side of the car to crush her two legs. (It didn't, thank goodness). Léon, who was in the seat behind her, shouted 'Woah!', and Anna who was behind me burst into tears. I stepped out the car to see Methuselah himself step out of the Ford. He looked a bit like you'd imagine Basil Fawlty's grandfather might have looked; tall, grey, gangly, open-mouthed in shock. I was gobsmacked. 'What did you just do to my daughter?!' came involuntarily from my mouth before I calmed down enough to ask him his details. He looked surprised and managed 'I got mixed up between my pedals' before his wife ranted that he only had two given it was an automatic, so how had he managed to floor the accelerator trying to do an emergency stop!? 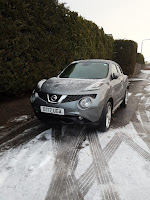 Anyway, he gave me his details, admitted all liability (in front of the witnesses) and trundled off (banished to the passenger seat) while I went about my shopping.

Chuggy's away now getting a new door and wing and I'm playing about with my free Nissan Juke hire car - I quite fancy trading the Ipsilon in for one of them, it's very nippy as well as feeling safe and heavy.

Interestingly, when I took my Chuggy to the coach builders for an assessment and a quote, the receptionist who was reading through my case told me that over the past decade she has seen a huge increase in the number of older pensioners in my area who run into other cars and then, because they are rather wealthy and they do not want the DVLA alerted to their little driving misdemeanours, come with the person they have hit and offer to pay their repairs and courtesy car cash so they do not need to go through their insurance. Basically they are paying to insure their car because it is illegal not to, but not reporting crashes so they don't lose their licences.

My elderly gentleman has gone through his insurance so will likely have to prove he's still trustworthy behind a wheel (I would say that if a pedestrian had been walking behind his car when he reversed, he'd easily have broken their pelvis or legs at the speed he hit me), but it is alarming to think the there are many unroadworthy drivers out there who are bypassing the system so they can keep their cars long beyond a point when they maybe should.

I fully realise that if you drive everywhere, losing that right is terrifying and isolating, but is it really as terrifying as potentially crushing someone's child against another car?
Posted by Phyl at 1:04 pm 1 comment:

It occurred to me the other day when I was mentioning Charlotte being a real 'millennium baby' that those of you who didn't have a baby that week might not have been fully aware of the ridiculous hoo-ha surrounding the millennium bug!

At my last antenatal visit before Charlotte's birth Y2K bug hysteria had reached a crescendo. The press was full of scare stories that all computer systems and all systems driven by computers were about to fail and we'd be plunged back into the dark ages! I wish I'd kept the actual hand-out I was given by the Queen Mother's hospital but I didn't realise years down the line that it might become a quirky and fun historical document. What I do remember of it is the following:

I was somewhat bemused and not overly worried given she was not my first baby. I went into labour at lunchtime on 3-1-2000, so they'd had fully two days plus to sort out any glitches. I made my own way to hospital (I lived five minutes away) at 8pm and it was dead. There were no other mums in labour that I could see, the lights were on, even the fairy lights on a tiny, scabby Xmas tree in the corner of the deserted ward seemed to be working. The radiators were hot, the fridges on and it was pretty much a repeat of my stay when I had had Marcel two years earlier! I was the only one in my ward as the great millennium rush hadn't materialised either. Definitely a bit of an anticlimax!

The baby photographer presented everyone born that week with one of these special frames! 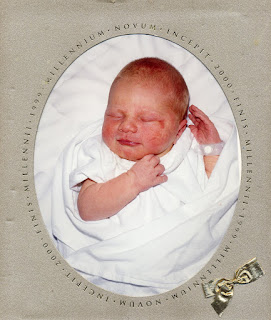 The 'Millennium baby' has turned 18!

How old does that statement make you feel? Wasn't the millennium new year about five years ago?

I remember when Marcel turned 18 I did a collage of photos to see how he aged through the years. I will do the same below with Charlotte, to see how the last 18 years have changed her (or not)...

So here is her lifetime so far in 19 images:

It has actually been an interesting exercise. If you had asked me an hour ago, without showing me any photos, I would have said that Charlotte has not changed at all since about 2009, because she has not significantly changed her hair since then, but when I look at the photos side by side, she has actually changed quite a bit.

It will be interesting to see what the next few years have in store for her as she moves on to university. Things are still up in the air as she hasn't fully decided what or where to study, but watch this space!
Posted by Phyl at 1:39 pm No comments: