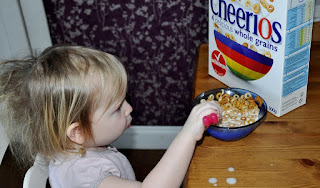 Since Amaia began talking she has flatly refused to call Cheerios Cheerios. She has decided they should be called Hoops ponges. At first I thought she was saying Hoop Sponges - which makes more sense given they are hoop-shaped and spongy-looking but she insists they are called Hoops - pause - ponges. Even when we have foreign visitors who happen to be up before us she states categorically that she'll have Hoops ponges and waits as they read their way through our cereal shelf, puzzled. They ought to learn her word, because hers is correct and Nestlé's is wrong! It wouldn't be the first time Thomas's mum or sister has knocked on our bedroom door and asked where the Hoops ponges are to be found! I must tape her asking for them before she finally dumps her word, although after nearly two years, the whole family now calls them that!