End of the blogging break?

For only the second time since I began this blog back in 2006, I seem to have blogged fewer than 100 days last year. I think, for the first half of the year, that was probably because I was concentrating on my more quirky Contemplating Denmark blog, where I managed 60 posts in just three months, but it too fell away by the summer.

So, why have I fallen off the wagon? I'm not 100% sure. I have still been writing, but it has been more for me and for my kids (and their kids) to read hopefully one day in many years time, than for the world.

I remember many moons ago, when dad was still alive, discussing what blogs were for. Dad and I loved the idea of rambling into the void, whether or not anyone was reading us. Mum, on the other hand, couldn't understand. She thought it was somewhat like publishing your personal diary. But I didn't agree. Blogs are for many things, but the deepest and most personal aspects of life never really make it onto here, so blogs are more of an anti-diary. So, maybe Covid dragging on and on-going health issues have led to a year of deeper thinking and therefore less publishing. 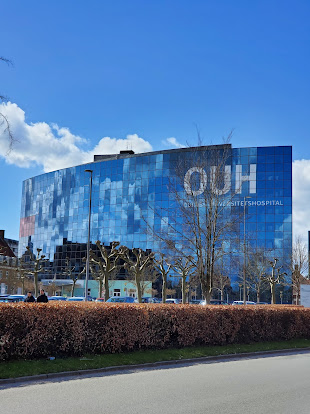 Last summer saw another health scare in my life, after 2018's 56-day+ ovarian cancer episode, I thought I had earned the right to a few years of peace on that front... silly me. In April, my annual mammogram showed some microscopic micro-calcium deposits along the insides of my milk ducts. That didn't sound scary to me, but apparently it can become worse than scary if left in situ so they whipped me in and removed all my milk ducts, and basically everything else on the right side, then reconstructed it. They then remodelled the other side to match and that led to many months of physio. I can now report Danish NHS food is 100 times better than Scottish NHS food😂

There have been several plusses:

I think I'll refrain from illustrating this post with a pic! Bet you're relieved!
Once it was all done and dusted, I asked the consultant what she thought had caused the calcium to form. Her answer amused me somewhat:
You can never tell, she said, but it's a problem that often occurs when you:
Given I score about -99% on all counts, being a non-smoking, (almost) non-drinking person who has birthed a football team and fed them for over a decade, she was left scratching her head, but at least I got a bit of a laugh!
Covid hitting the world two months after we moved to this house and then last summer's shenanigans have not been great for our integration here. I assumed by now I'd have at least a part-time job out of the house, rather than the lonely freelancing of the last few years, and I'd have a host of new friends. Instead we've been holed up for so long, I can barely remember what socialising is. Thomas is turning 50 in five weeks time and I sat down to draw up a guest list for a potential party... only to realise that we know almost no one within driving distance, especially on a Tuesday night! Ho hum. I guess I should get to work on his 60th instead, as we might be back to normal by then!
Anyway, the long and short of it is that I am hoping that in 2022 I will find myself a little more often in the blogging saddle. Fingers crossed.