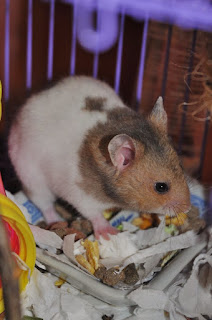 Of all the kids, Lots has always been by far the least interested in animals. She was scared of dogs as a small child and often jumped anxiously when someone walked past her with one on a lead in the park. I'm not sure what the cause of the animal animosity was. Granted, as an extended family we had no pets, but I had grown up with cats, my mother had had a dog as a child, Thomas had had rabbits and his parents had a cat so it wasn't like anyone else was giving off anti-animal vibes. She just had a great distaste for anything furry. If someone walked by with a kitten or puppy she didn't go over for a look, she didn't see what the fuss was about. To her animals served only one purpose and that was in a curry sauce.

Marcel had gone through a wanting-a-pet phase at about eight but I was in the throes of leaving his father so it was fairly low on my to-do list back then. But the last year Léon has become unstoppable with his constant harping on so we weighed up the options - the climate ruled out a dog for me, the bus route next to our house ruled out a cat unless we wanted a splat instead of a cat, no one could be bothered with a fish tank and we felt a bit sorry for guinea pigs and rabbits outside in Scottish weather, so a hamster was bought. Lots didn't come along to choose her, and showed no interest when we brought her home despite Amaia jumping and shrieking with excitement. She's more or less ignored her for the two weeks since we brought her home.

But tonight I noticed she stopped and looked in (the cage is in the hall between the TV room and the living room). I watched. At first she spoke to her, then started to hand in some nuts and seeds, which Rosie was taking in her paws and storing in her cheek pouches. Finally she started shredding paper and playing tug of war with her before letting her drag it in and take it off to make a bed. She was soon calling me out to see what Rosie could do (she was making some bedding and a food store in her tube). She's stopped short still at calling her cute (so far), but she's definitely beginning to warm to our little hamster.
Posted by Phyl at 12:49 am