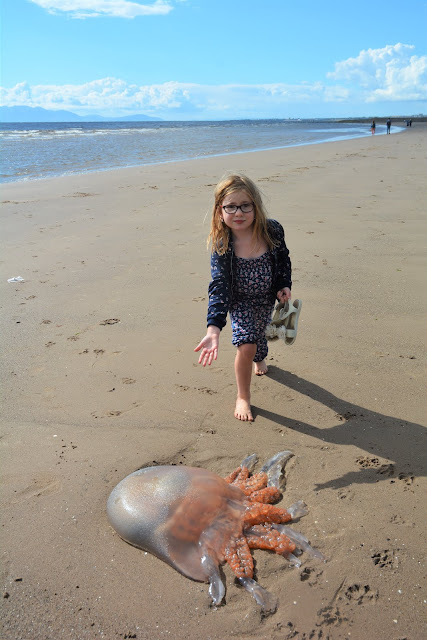 We found quite a beast the last time we were on Irvine beach. I was going to blog it at the time for posterity but I completely forgot - so here it is today. Thomas isn't convinced it's a jelly; thinks it might be an alien who has fallen to earth!
Posted by Phyl at 10:59 pm No comments:

We have come to a decision

And so at 11-30 last night, with one click of a button, Charlotte's life split into parallel universes. 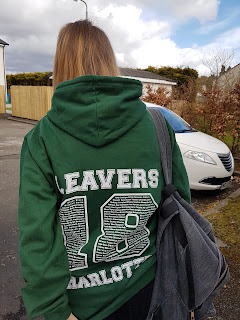 There was the one where she left home and joined Marcel in Edinburgh to study Law at Edinburgh Law school - rejected.

There was the one where she stayed here and joined my old Alma Mater to study Law there too - rejected.

There was History, again at Glasgow, also rejected.

After many months of agonising over whether to go for a course, she knew to be prestigious, difficult and worthy of her 6 A Highers but which held no interest for her and which would lead to a job, which again was not in her heart of hearts right for her, we reached May 2. May 2 at midnight is UCAS deadline day. Marcel has been an absolute star for the last month, downloading her past paper exams and course materials and talking her through what is actually involved in a Law course, an invaluable source of advice, which he, as oldest child, had no recourse to three years ago when he was deciding.

He underlined to her the fact that even the maximum SAAS loan on offer could not cover the cost of university accommodation, let alone food, travel, books and social life, so she would be looking at a minimum 16 hour a week job on top of full debt. He had her imagine how it would feel to read 500 pages a day on a subject that she was not interested in. He also explained that even if she does what she loves, preferably something reasonably challenging to get into, she can still to a postgraduate conversion to Law if she suddenly had a change of heart. He's been showing her the dissertations he's had to hand in this month (as part of his Honours finals) and having her read through them. Like many of her friends, Charlotte had applied to Law because it was hard to get into and sensible, rather than because she could ever see herself in that field. Shockingly, some who have already accepted their places know nothing of what they are going to study, as she found out when she, in turn, showed them the past paper exams last week.

She loved the idea of moving to Edinburgh, as Marcel had done but she knows he works 20 hours a week for Apple to pay to live there. Apple pay well compared to many student jobs and Lots is more reserved so less likely to get that type of sales job. She decided as a compromise, to promise herself a year or two in Edinburgh after graduation, maybe even a postgrad at Edinburgh.

So she had to find a compromise... something difficult to get into, but which matched her skills which are both literary and numerical, which leads to a well-paid job but doesn't mean she has to drop out of her language learning which she enjoys, something where she can work if she needs to but can also not work if the workload is too heavy. 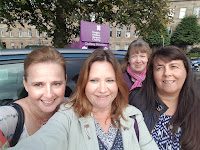 And as for the course itself - Economics with Spanish, or as she put it 'Maths but with a purpose' and the amazing opportunity to follow in my footsteps as an English language assistant in her third year, but in Spain. I think she'll be happier than she'd have been studying something just for the sake of it, and to be honest, I still wish Marcel had followed his first passion (English) and done a conversion afterwards, rather than watching him, as I am doing now, running between the Apple store and the library, with little time to appreciate the wonders of the beautiful city he's living in.

A theme that came through strongly at Mearns Castle's graduation ceremony was that you should follow your passion, and choose a career you want to get up for in the morning. You only get one life, so spending it doing something you are not passionate about, would be rather sad.