Brexit - no, thank you 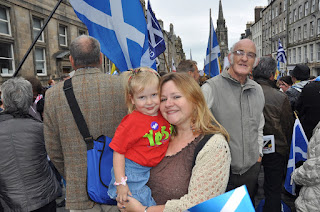 I should probably write something about Brexit but I haven't a clue where to start and it depends on my mood whether you get 1) an angry post full of four letter expletives at how the Westminster parliament is treating EU families who have settled here decades ago and built their lives around a given that they are prepared to take away, 2) a resigned mood where I wonder what the point of anything is and hide under my duvet sobbing, 3) a freedom-fighter one where I dig out all my old Yes Scotland stuff and this time fight to the death for my very survival, or even 4) an adventurous 'let's sell the house, pack up all the kids and disappear to mainland Europe while we still can' fuck-the-world one. I have been fluctuating daily between all these alternatives since I awoke to find the duped, the desperate and the racists had snatched my children's futures from them.

My kids are the result of a family tradition of international intermarrying. Both my husbands had parents of mixed European origin - Thomas is half Danish, half German, his predecessor was half French, half German and yet someone has decided for my kids that they won't be able to carry that tradition on. Wandering round Europe freely and falling in love is no longer allowed! And my heart breaks when I think of how small their world is becoming. I am angry as their international universities risk becoming parochial because of the whims of some ill-informed bigots in another country. I scream at the computer (I've stopped watching TV - it's not good for my mental health) when I hear people wanting to stop others from coming to work here, without ever realizing they are also stopping their own kids from being able to go there and work. I am one of those European kids (ok I was one of them in the 80s and 90s) - I have lived in France, and Germany and Italy. I have studied internationally, I have married internationally and it has enriched my life considerably.

Two years ago I fought passionately for Scotland to become independent for exactly this reason. I could see how narrow and insular the popular press was turning England and I shared that dream described so eloquently last week in the EU parliament by Alyn Smith: I wanted a Scotland that was internationalist, co-operative, ecological, fair, & European. I could see this referendum would be called at Farage's whim and I could see Out was a very real possibility. I wanted my children to grow up in a society where we care about the weakest in society, where we celebrate each other's differences and love what makes each other special. I could see that the separatist movement in Scotland was aiming for an inclusive state, within Europe based on our perception of the Scandinavian model. I'm married to a Scandy man so I could see the merits of a society where women can actually afford to work, childcare works and isn't a few hours in the middle of a working day, and kids are paid to go to university because an educated population benefits all. England's introduction of tuition fees and privatising of their NHS filled me with horror - it was going in all the wrong directions for me. I shared that left of centre ideal for Scotland the the SNP, the Greens and the Socialists amongst others were offering us and I still do. Imagining 62% of us could vote to stay in the EU and seeing us pulled out underlines what we've been saying all along. Last election we voted for a left-wing government, the Tories got just one MP from Scotland, but still we have a Tory government. Now we have voted overwhelmingly to stay in the EU, so if they drag us out then there is no point in ever voting here because 5 million people can never be heard over 60. We might as well stay home forever more on polling day. There is no point in politics in this union and therefore, there is no point for me in this union. So I guess I have my answer... I have no option but to go for solution three and if that fails number four will need to be put into action, somehow. Otherwise I won't have fought hard enough for the future my kids deserve.
Posted by Phyl at 4:11 pm No comments: