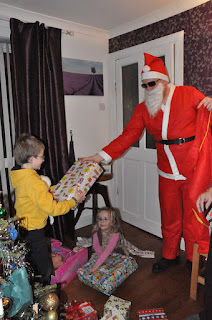 I forgot to blog it on the night but given how sweet it was I want to capture it here for posterity!

We do Xmas the European way. My first years as a mother were spent in France and latterly, being married to a son of the manse (however unreligious he turned out!) it just seemed normal to carry on that tradition. Introducing Santa and Xmas morning presents to kids who were six or eight when Thomas and I got together would have been a bit odd. So in our house the presents are unwrapped on Xmas Eve after dinner. They are given by mummy, daddy and the rest of the family so there are no great 6am wake-ups in this house, just calm present-giving. I can definitely recommend it as a way to go when you have kids after 40 and can't face the early morning hysteria! They also know not to expect gifts beyond our means and appreciate our part in it which is lovely.

Anyway in Europe, although Santa doesn't bring all the presents, he has been introduced occasionally to drop by after dinner with a present for each kid. Thomas decided (when he found a Santa suit reduced to a fiver) that it might be fun for Santa to drop by this year for the first time ever. He borrowed an old pair of sun glasses so as to disguise himself better. He rang the doorbell after dinner. Marcel and Charlotte played along. Anna and Léon looked vaguely puzzled muttered that he sounded a bit like daddy, mentioning how odd it was that Santa spoke Danish! Amaia on the other hand was completely taken in by it. She looked utterly terrified and squirmed on the spot, her whole body language screaming at 'scary Santa' to get lost! She was not at all a happy bunny. She couldn't wait to get rid of him! Sweet. 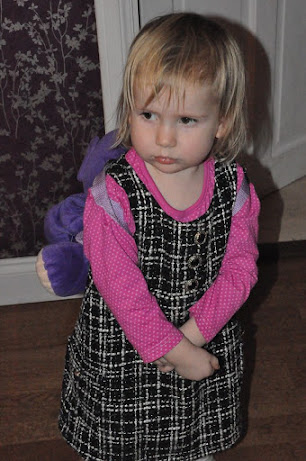 I wonder if kids ever really like Santa? I remember when my friend's husband dressed up as Santa for Marcel and Charlotte when they were little Charlotte was even less impressed than Amaia! 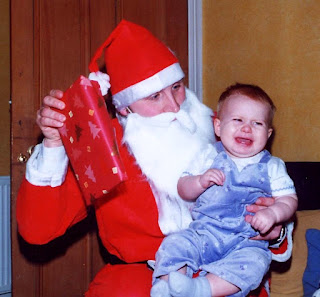