Aptly named, after all? 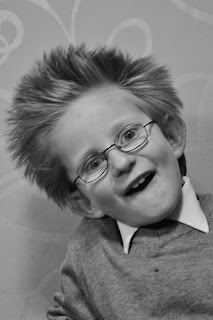 Léon's name isn't actually Léon... Technically, his real name is Léon-Olivier but that is a bit hard for his Scottish compatriots, so he gets called Léon (which in itself is hard enough as we pronounce it the French way, not the English way).

Anyway, people have often remarked that we chose to shorten it to the wrong half, given his nature. You see, Léon is a very soft and gentle little boy, and is not at all lion-like. He also has a very conciliatory nature - quite olive-branchy! However, I think in the last few weeks he's grown into his name! His mane has taken over! He's been badly in need of a haircut but I kept thinking it was a bit mean to have all that cut off in this cold weather.

I've known since he was a baby that he has extremely thick hair. Once, at the hairdresser in town, when he was just one, the woman who was cutting his hair remarked to me that she'd been cutting hair for thirty years and had never cut a baby before whose hair felt like a grown man's! Anyway, tonight when he spiked it up using little more than his sticky hands, I decided enough was enough - he's just going to have to wear a hat to keep warm because like that he actually looks like he's wearing a fancy dress costume!

Sadly, I do think that however long the fashion gets, poor Léon is never going to be able to opt for anything other than a short back and sides because it just becomes way too overstated and unwieldy when it gets any longer.