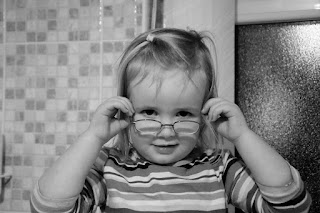 Anna first got glasses at the end of November last year. They told me she'd get a new pair once a year. I knew this to be the case given Léon has had glasses since p1, but still having any child that small wear a pair of glasses for a whole year without them being bent, lost or smashed is always a nerve racking trial.

An appointment was made for her at the Victoria infirmary the last week of October so I took her along happily for her new prescription, only to be told they were just checking her current glasses were ok and that her prescription appointment was three weeks later. Given I have to take her out of school, and I potentially have to take time off my own work, I moaned that these two appointments should rolled into one but my complaint fell on deaf ears.

I was told to make an appointment as close as possible to November 20th for her new glasses. When I rang for the appointment the closest they could apparently give me was December 24 in the afternoon. I wasn't overly pleased with that given we do Xmas on the 24th, being Danish but decided the glasses were a priority and prepared to take her.

A couple of days before Xmas I got a letter telling me they'd had to cancel and her new appointment was mid-January. Given I had been told in October her eyes had improved to the point that her current glasses had too strong a prescription, I was seriously annoyed. But I hadn't counted on that letter being followed by a second one two days later moving November's appointment to 18 February! I'd had enough but couldn't get through so emailed them a rant about my child in the wrong glasses for potentially five months when they were the ones constantly moving the appointment. I told them it was unacceptable and to send me a cancellation if possible.

Eleven-forty this morning the postman came. My new appointment! At last! I opened it half expecting it to be March, but no! Go on, guess??? 'We are pleased to tell you we can fit your daughter in on January 7 at 11-30am!' FFS. I'm now on hold while the orthoptist tries the Southern and Gartnavel for an emergency appointment. Deep breaths...