I suspect my translator/linguist friends are likely to be treated to a monthly head-shaking session induced by the faux pas of printing something that has been google(or similar)-translated without being proofread by anything close to a native speaker, or even proofread at all! We bought it in Cortona last year with a view to cooking a nice Italian dish once a month but as it was shrink-wrapped we didn't see the added bonus of it providing hours of blog-rant ammo...

The Italian is obviously the original. It reads reasonably well. The Spanish is passable, though has a few minor errors but has been translated directly from the Italian. If you only speak English, you will be surprised to hear that the English is actually miles better than the French or German! For some reason once the English has been produced by machine-translating the Italian, they have fed the machine-written English version through the translator to produce the French and German, rather than using the original. Maybe they thought it would cope better with that? (They were wrong!) 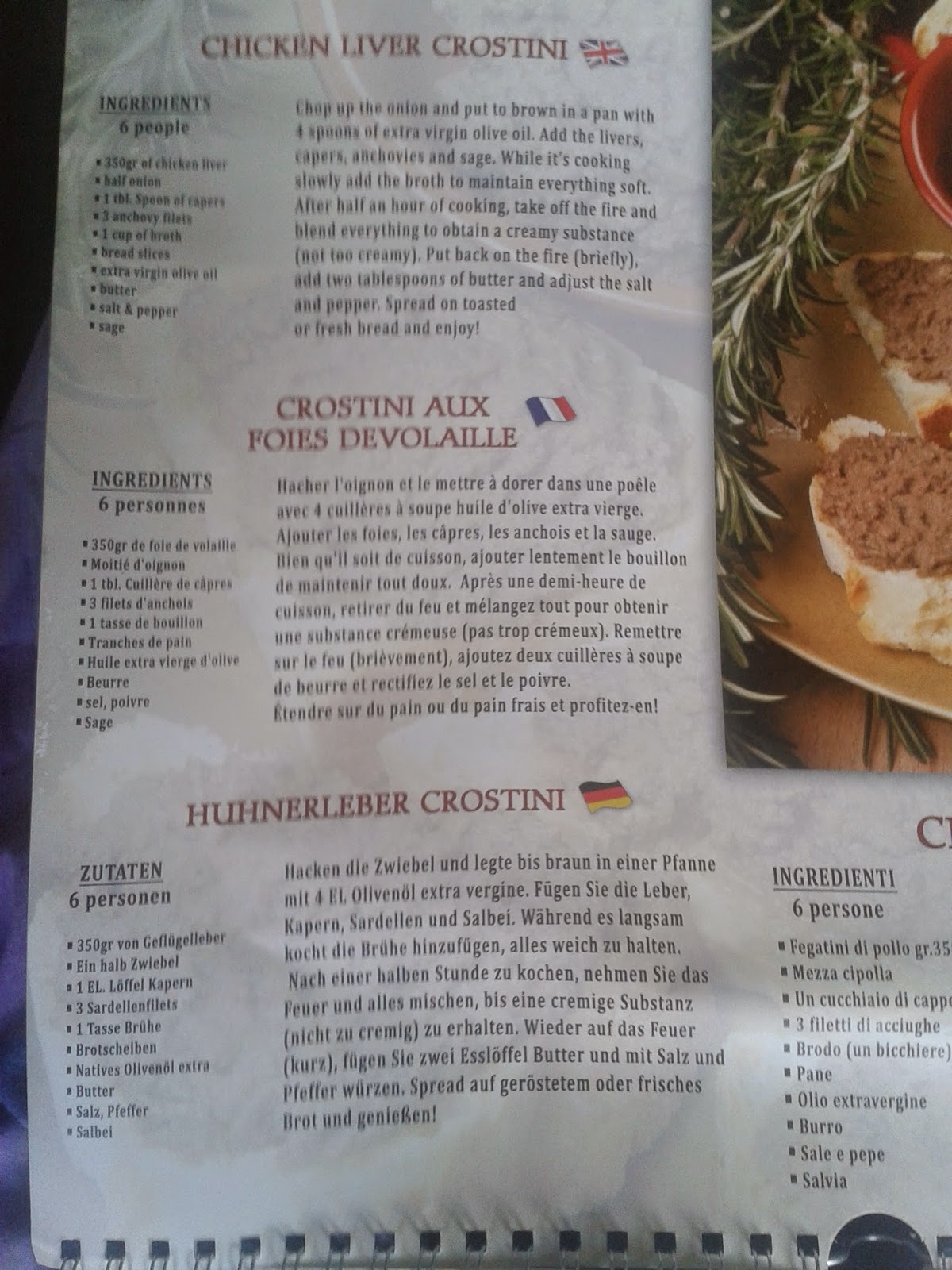 Let's start with the French. The French is bad, really quite bad. If you speak French, read it and laugh! We are first confronted by infinitives instead of imperatives, use one or the other but don't mix them. However we get the gist. The word for sage seems to change between the (not-very-idiomatic) list of ingredients and the actual text (the text is correct). Where it ever got the idea that bien que has anything to do with 'while' in the sense of time is mind-boggling... 'De maintenir tout doux' - very literal and totally nonsensical! Finally they get into imperative mode by the middle but it is beautifully juxtaposed with another infinitive... 'retirer du feu et mélangez'. Une substance crémeuse/crémeux - give me strength - adjectives have to agree every time they occur in a sentence not just the first time... But my favourite line is at the end. 'Étendre sur du pain ou du pain frais et profitez-en!' Hahaha - I am already imagining myself in a restaurant being asked 'Vous voulez du pain ou du pain frais, madame?' Once you've got your breath back from that, let's look at the German.

The German is beyond laughable. It makes me want to cry. I don't know where to start with it - it goes off the rails at the first word, and by the second verb has jumped person. And there's a wee bit of Italian left over in vergine!  By the second sentence the phrasal verb has lost some bits, and the choice of verb leaves a lot to be desired! What happened to German word order in the next line is beyond me but the meaning leaves a lot to be desired too. In the next sentence I am hoping you don't burn your hands too badly while you are mixing it with the 'fire'! Grammatically the next bit is completely meaningless. I'm crying already... The following clause has no verb at all - I guess that is one way to make sure you don't get the verb wrong! But I think the crescendo has to be the use of Spread - you know that great thing machine translation does when it doesn't know a word - it leaves the original! And of course who can fail to appreciate the beautiful mismatch of geröstetem and frisches?!

Even the list of ingredients in each language is wrong! I suppose we are lucky to speak all the languages used - that way between them we might manage to cobble together a version that works!

(And for the really pedantic amongst us, don't you love their choice of abbreviations on the other half for the days - I am particularly fond of G/T to mean Thursday! :-D)

But on a more positive note, maybe I'll go and check if the calendar has a publishing house printed on the back and I will send in my business card (and Thomas's given his Spanish is better than mine) and offer our services before this year's print run!
Posted by Phyl at 6:37 pm