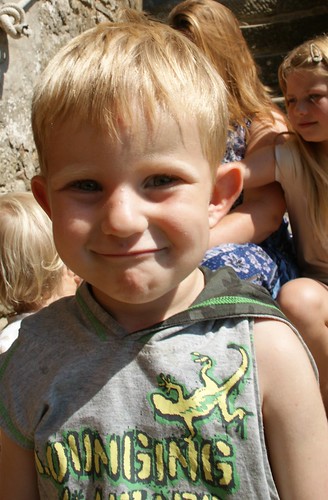 After nearly 18 months of spot problems with Léon we went on holiday to Tuscany. The weather was great, sunny and generally not under 30C except during three afternoon thunderstorms and nights when we got down to a chilly 27C. We were not within walking distance of a shop so his fresh milk intake diminished, though his ice cream intake increased so maybe one cancelled the other out... His diet wasn't wildly different - we'd more pasta and tomatoes than usual, more salami type cold meats but in general the same. He drank mainly water though had a few fizzy drinks. Suddenly as if by magic, my wee man was spotless. Excellent! Problem solved...
Of course we had to come home again. We arrived back on Friday night and just two days later they started to reappear as if by magic :-( What is causing this? Is he allergic to Scotland?
Posted by Phyl at 7:10 pm

Could it be psoriasis of some sort? Psoriasis often get better when exposed to sun.