SOMEONE WENT AND STOLE HIS SCONE 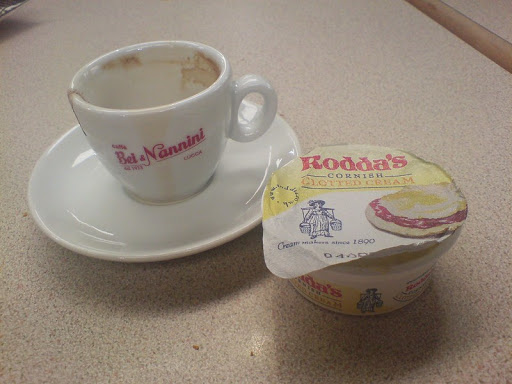 Ever since Thomas has been under the redundancy guillotine he's been quite dynamic from an entrepreneurial point of view. Even at the best of times, he's always full of good ideas and interesting political views, but at the moment it is like he's seeing everything through its money making potential. He's been thinking up company ideas, reading up on accountancy, how to set up a limited company, you name it, but at the same time he's become very aware that every little thing you do can add to the overall total. Since I've known him he's always been a big fan of scones with clotted cream. He often makes scones and we have them at home with clotted cream. Maybe it's because clotted cream isn't really a big thing back in Denmark. Often he's been extremely disappointed when nice cafés have only had butter and jam on the menu alongside their scones. When you ask for the beloved cream, you are often told they don't stock it because they don't get through enough to keep it on their menu fresh. Last Saturday he awoke almost with a start and announced he'd come up with a brilliant business idea. You know the little pots you get in cafés with jam and milk in? he said rubbing his hands in delight, well I'm going to look into marketing little individual portions of clotted cream - genius!. I sounded like a great idea. I have been with him on at least twenty occasions when he's asked for clotted cream and drawn a blank. Go for it! An hour later we found ourselves in Rouken Glen garden centre looking for alpines. Fancy a coffee? he asked. We shouldn't really - not this close to job oblivion but they do make nice scones even though they never stock the cream... Ok then, you've twisted my arm So I am stanidng debating between plain or fruit when my eyes fall upon a handmade poster complete with arrow: Trial offer: Scones and clotted cream I follow the arrow to the basket full of individually boxed clotted creams... He seems to have got his big business idea about a fortnight too late. Oh well, back to the drawing board.
Posted by Phyl at 11:53 pm