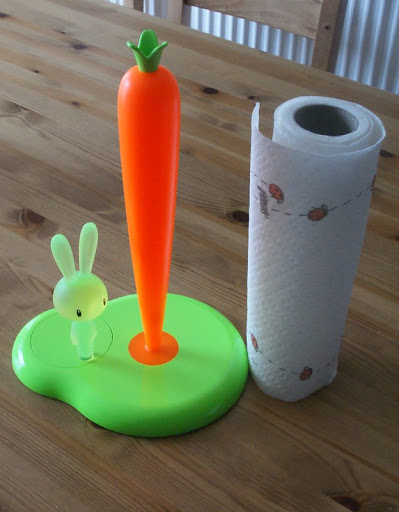 Is it a Danish thing, or is it simply a Widmann thing?
I am compelled, from curiosity, to blog this as it has been puzzling me ever since I moved in with Thomas. You see, if it turns out to be a Danish thing rather than just a Widmann thing I swear we should all buy kitchen roll shares in Denmark and then retire!
I grew up in a house where there was always a kitchen roll hanging in the kitchen. We used it when someone spilled their coffee or if a child sneezed and we couldn't quickly find a hanky. That was about it.
We had it but it wasn't a big part of our life.
When I left home I didn't really bother with kitchen roll and when I lived with André, we bought it occasionally but 70% of the time we had none at all.
When I sneezed there I used a tissue, or loo roll (that I can't live without!!). When someone dropped a coffee, I'd throw a tea towel over it and then put the tea towel in the wash. To clean the table I'd use one of those little sponges which is green on one side, rough on the other. I dried the table with a blue cloth, which I would also wash afterwards. I never actually needed kitchen roll.
Then I moved in with Thomas and on our first shop in ASDA he bought a pack of six. Handy to have around, I assumed. A week later he bought 6 more, and so it went on!
His family came for the wedding. The pound has crashed against the Danish currency so his family had great days out at Silverburn stocking up on shoes, clothes, suits etc. They'd come home each time arms full of bags from various designer outlets, but I had to laugh because both his mum and his sister dropped into the big 24 hour Tesco and bought a six pack of kitchen roll for use here too! (His sister was only here 48 hours!!!)
If the UK was repopulated by Danes/or Widmänner tomorrow then landfill would be overflowing with kitchen roll by a week on Tuesday!
They use half a roll at each meal. They wet it and use it as a cloth to wash the table, then dry it with another 10 sheets, the pile of used kitchen roll taking over the bin. If they bake a cake in the kitchen and get chocolate, flour and icing sugar over 15 square metres, they happily go through 4 kitchen rolls cleaning the kitchen from head to toe! Now I don't argue with the fact that it must be more hygienic, but maybe it is the mean old Scot in me, but I just couldn't use pounds and pounds of kitchen roll after cooking every meal. I am happy for Thomas to come round the kitchen after I have used my trusty sponge and cloth, and wipe each surface once more with a sheet of the white stuff if it makes him happier but if I was expected to use a whole kitchen roll every day I'd be quaking at the expense. Amazingly, when Thomas runs out of the stuff (not that that happens often!) he is actually happy to use half a toilet roll to clean the dining room rather than a cloth. That is really weird, it just isn't absorbent enough to wet and use as a cloth to my mind!
Anyway I am really intrigued as to whether I have just stumbled upon a kitchen-roll-loving family or if the whole of Denmark is overflowing with used kitchen roll!?
Posted by Phyl at 11:18 am

Damn! I'd been hoping to retire on my shares idea!