'J' and the Goldfish! 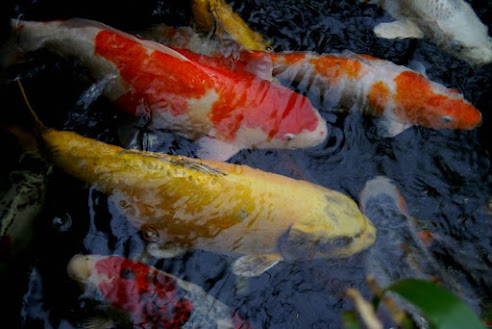 Mum was out for lunch with her the other day and was recounting the story of us losing Rosie. 'J' asked if Rosie was easily replaceable in a find another hamster that looks the same, stick it in the cage and lie to the kids kind of way, so mum pointed out that because of the odd diamond on her back that might be hard.

Many moons ago, when her children (who are just a few years younger than me) were still living at home, a neighbour had asked them to look after their pet goldfish while on holiday. They had two. A week into the holiday 'J' was beside herself when she found one floating lifeless on the surface of the tank one morning. She decided that goldfish were replaceable so scooped the dead body out, wrapped it in kitchen roll and stuffed it in her handbag. Later that day, she made her way to the local garden centre and took out the dead fish and asked the assistant if they wouldn't mind looking through their fish for something similar in size and markings. The manager seemed somewhat surprised she had a dead fish in her handbag but caught a few in his net before she agreed to one which was a reasonable replacement. 'J' returned home, her plot had worked.

You can guess what happened a few mornings later though, can't you? Yes, fish number two kicked the bucket too! So off 'J' went with another handbag containing a corpse and after rejecting many fishy impostors and exasperating the manager to the point of being asked not to bring any more dead fish into his shop, she returned home once again. Mission accomplished.

The friend returned from her holiday and didn't notice. Neither did her kids. Phew... 'J', of course, felt bad so took the neighbour to one side and explained what had happened and how the kids would never need to know. The neighbour didn't seem to appreciate the lengths 'J' had gone to and disapproved of lying so immediately called the kids in and used the opportunity to explain death to her kids citing what 'J' had done in their absence! 'J' was of course incensed after all the bother she'd gone to!