Sometimes it doesn't hurt to give in... My kids told us they felt a bit like freaks. Unlike their contemporaries McDonalds (I actually had to check whether it is McDonalds or MacDonalds as I typed this sentence! How sad is that?!) isn't one of their staples. I think I've personally been three times in my life but my youngest two had never been and Léon and Lots have only been with school friends. (Marcel must have been but he's on holiday so I can't verify that!) Anyway Anna had taken to bursting into tears and saying she was the only p2 who didn't know what a Happy Meal was so Thomas decided that despite the fact that he could cook something much tastier for the money, there are times in life where you have to give in and let your kids be kids. So down we went to Thornliebank. Once inside we got extremely funny looks. You see apparently when you walk in with kids aged 7, 5 and 3 (Lots wasn't with us) you are meant to know what you want to order and do so immediately rather than spending ten minutes standing at the wall reading the options and explaining to your kids what is on offer. I swear we'd have been less noticeable wearing flashing neon 'freak' signs! Eventually we opted for one fish, one chicken and one burger happy meal and they ate it happily while playing with their free smurfs. A toy in a dinner box is a bit of a strange concept to kids from a home with a strict 'No toys at the table' rule but what the hell - let's break all the habits of a lifetime in one go!

We're now back home and I am tempted to make real food (I had one burger - it was nothing-flavoured but inoffensive in a 'I could eat this once a decade if I have to' kind of way!)


It wasn't quite wild garlic risotto but now the kids are happy at least and we can probably get away with not doing it again for another five years if we're lucky. 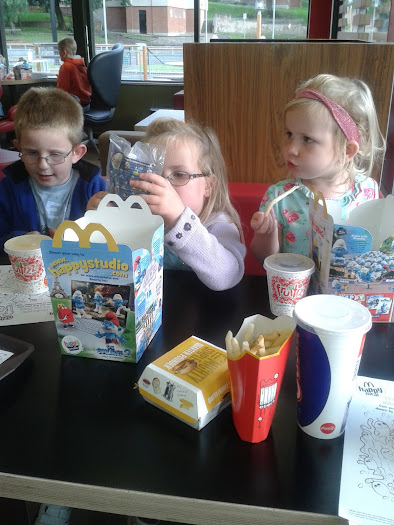