You can hardly move past our herb patch at the moment for bees. There are several on each flower with the oregano, sage and edible blue salad flowers being definite favourites.
Walking past the herbs, Lots commented a couple of days ago that she was concerned by the number of wasps but I let it in one ear and out the other assuming she was mistaking bees for wasps.

A day later however, I passed it and noticed she was right. While the majority of the herbs were knee-deep in bees, the fennel flowers were exclusively populated by common wasps. A quick check on the Internet led to the discovery that fennel is a firm wasp favourite so given its proximity to my kids' sandpit I have now been out with gardening gloves and secateurs and have slowly (and as calmly as possible) chopped every single fennel flower into my compost bin, shaking at least three wasps off each as I went along - without a single sting! 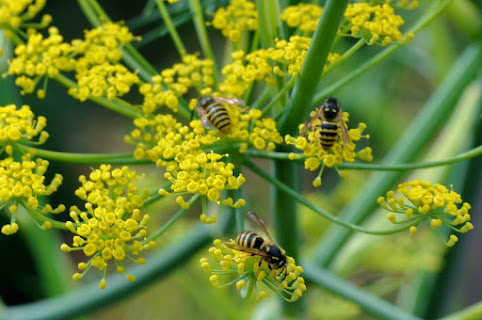 I'll be keeping my eye on that one from now on though!
Posted by Phyl at 11:32 pm