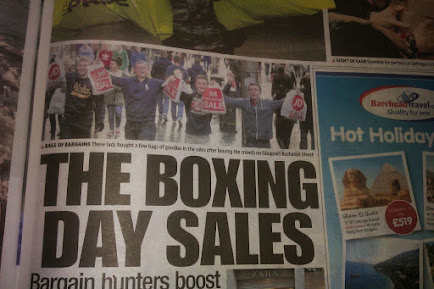 I thought Marcel was insane when he sneaked out of Derek's house at 8am (having gone to bed around 3am) to walk into Glasgow to meet up with four or five of his friends. He was more than pleased when he managed to get a Hollister T-shirt reduced to a tenner, some Adidas joggies for his football and another couple of things. What he forgot to mention was that as the last four of them made their way up Buchanan Street, they'd been jumped on by a reporter from the Daily Record, who'd used them in a photo shoot. So when he told me this morning he had 'made the papers' I thought he meant he hadn't slept in for his paper round despite it being a holiday. I didn't realize Euan, Duckett, Marcel and Andy had 'made the paper' this morning. Check out p9 of the Daily Record!

Amusingly Marcel has just told me two of the boys spent today taking back what they bought as it didn't fit. So I guess they got in the paper for buying nothing!
Posted by Phyl at 2:26 pm