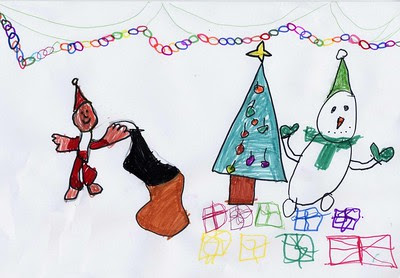 Ok, I officially give up. The cards on sale in specialized shops such as Clintons and all the big supermarkets are hopelessly inappropriate and although I can find the odd one online, it is a bit late for that.

Here are the issues. Firstly, unlike with normal greetings cards, none of the shops seem to offer a 'blank for your own message' version. I know these are much less common in the UK than cards with pre-written messages but at least for most occasions, they exist, but apparently not for Xmas.

I have always bought a special card for my parents, given I don't really do cards anyway. It seemed more special than giving them one from a pack of twenty. Obviously it always said 'To Mum and Dad' on the front. Obviously I cannot buy a 'To Mum and Dad' card this year. It isn't of course the lack to 'To Mum' cards that is presenting the second issue, but the wording. 'Have a great Christmas' 'Hope your Christmas is truly magical' 'Have the best Christmas ever, as you deserve' etcetcetc. The sentiment is great but wholly inappropriate. Doesn't it occur to anyone in the card industry that people may have been recently bereaved and therefore wishing them a magical Christmas is highly insensitive?

The first time this issue occurred to me was 2010. Less than ten weeks before the Xmas cards were due to flood in, dad had been given just over three months to live. I didn't even know if he would see Xmas and yet mum and dad, my brother and I were all receiving 'Have a wonderful Christmas and hope 2011 is the best year yet' cards. When dad survived two more Christmases, again magical and jolly were out of place but I didn't blog it then as it paled into insignificance beside the true day-to-day realities of living with a terminal illness. Birthdays were the same, offering nothing but joy and happiness all year long. Now we are in the picking-up-the-pieces-and-trying-to-survive-without-my-beloved-dad stage, the cards are upsetting and I can take time out to say that. Just one person (mum's next door neighbour) managed to find a 'bereaved Christmas card' for her and she was deeply touched by it. It was covered in snowdrops and said 'Thinking of you this Christmas'. We need blank cards, or we need 'Thinking of you this difficult Christmas' cards. I have friends whose only child died in October at the age of 45 - you can't send them a 'Have a joyful Christmas' card. My mum's neighbour's daughter died in the summer - she was an old classmate of mine. She can't send them one like that either. Millions of people who are bereaved or dying or who've simply lost jobs or got divorced etc need to be catered for in the over-jolly card market, and the main high-street retailers are just not there for them.

Anyway. They've lost my custom. So I will make my mum a card this year.
Posted by Phyl at 7:55 pm