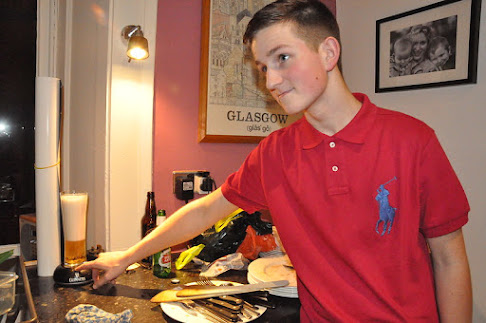 I was shopping months ago in Makro when Thomas spied a pile of Guinness surgers beside the cases of Guinness at the back of the shop. He got very excited, insisting not only that I buy one for Derek for Xmas but also promising that if I bought him one he'd forget about it again and act surprised on Xmas day. Not being much of a drinker, I felt a little silly asking what it actually did, so I simply bought it.

On Xmas day Derek got very excited about it. (Either that or he's extremely tactful!) In fact I'd go as far as to say I have never offered him a gift in all his 41 years that has made him look as thrilled! We tried it on every beer in the house and people were even questioning how it might affect Irn Bru as I was going to bed! Being allowed to press the button was apparently a great privilege!

Yesterday Linda, another beer-loving friend, was round. She too started acting like a five year old in a sweetie shop when shown it.

I must be missing something, I guess.

Here's a demo for anyone who is as in-the-dark as I was till Tuesday.