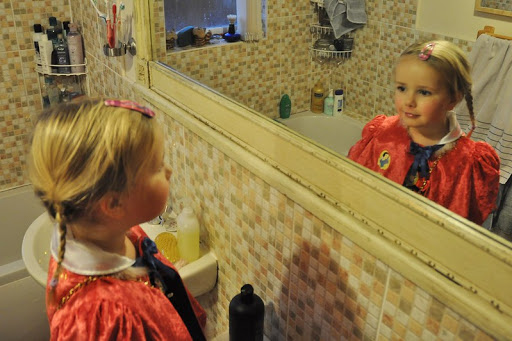 Things can be complicated in a family with four different surnames. I'm Buchanan, Thomas is Widmann, the wee two are Buchanan-Widmanns (or is that Buchanan-Widmen?) and the three biggies are Gautiers. The younger ones in particular long for the simplicity of one family surname. I hate my kids not having the same name and it always seems ironic to me that three of my kids share a name with someone they have no contact with and who has no influence over their upbringing.

It's annoying (to say the least) when I get called Mrs Gautier, odder still when Thomas gets Mr Gautier. I guess I don't mind being Mrs Widmann, as technically I am Mrs Widmann, I just didn't change my name. I also often get Phyllis Buchanan-Widmann, which isn't my name either but many people infer that from my kids' names. And even in the 21st century I do get vibes from the more conservative members of society, that there is a mild sense of disapproval that I didn't change my name on marriage!

Marcel has been contemplating changing his name when he turns 16 and it is also something Lots has been looking into. So family dinners often degenerate into jokes about name-changing and whether we should simply invent one family surname for all of us. And then this week Anna came up with it!

You see there are two Annas in Anna's class, so they have to put their initial on all their work to differentiate between them. So the other Anna signs her homework AnnaR and our Anna signs hers AnnaB-W. I remember it from Marcel's day too - there were several Caras in his class and the kids all referred to them as  Cara Cee and Cara Tee, as if that was their given name. They are in p1 so they only know the phonetic version of the alphabet, therefore the other Anna gets called Anna Ri and our Anna (given the kids don't know the word hyphen) gets called Anna Bi Line Wi!

So there you have it - we could change our family name to Bilinewi (bɪˈlaenwɪ)! Cool?! We'd be unique!