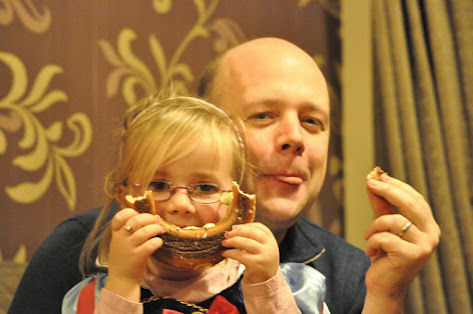 I recently noticed on Facebook that one of my friends had mentioned their local Lidl had put in an on-site bakery. Given they live on the other side of the country, we put it on our to-do list to drop into ours to check if the west coast Lidls were doing the same.

Bingo! Darnley Lidl now has its own bakery - everything smells lovely baking there under your nose and better still, once it comes out and gets put on the shelf it is less than half the price of Tesco's in-store bakery when it comes to pretzels, croissants and similar.

Those with German ancestry in my family (ie everyone but me) were more than thrilled to taste their native (or rather half and quarter-native) fare and I'm not averse to it either. I think we'll be visiting Lidl a lot more often now that's been installed.
Posted by Phyl at 11:18 pm