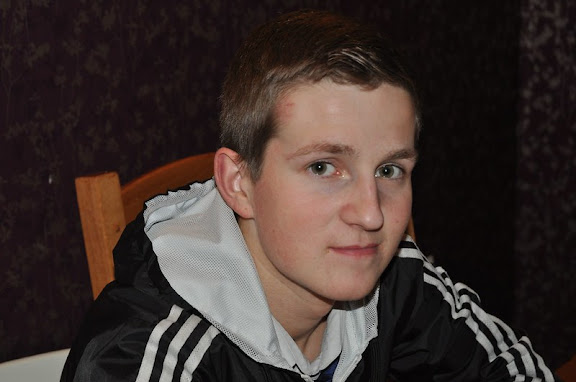 Maybe I shouldn't have told Marcel to hurry home after school yesterday to study! His prelims were due to start today - English Int 2 first of course so he left school by the back door and made his way down the back stairs to the bus stop at the main road. It was -5°C and the ground frost hadn't melted all day. As he crossed the playing field, he said the last thing he remembered seeing was his leg as it came towards his face as he slipped. Next thing he remembers was standing on the grass with his friends holding him. They said he's been unconscious for a couple of minutes. He'd slipped and knocked his head on the frozen pavement. Then the silly boy decided that getting on the bus home was somehow a better option than phoning me to come and get him.

At home Charlotte walked in at 4-10 as usual. Marcel didn't follow and she said he hadn't been on the bus. I wasn't overly worried as he sometimes hangs about with friends and comes home half an hour later. When he did show up he walked passed the room I was sitting in without a hello. He didn't switch on the cappuccino machine either, which he usually does before taking off his blazer. This was out of character. Then he walked in with what at that point looked like a full hard-boiled egg-sized lump on his temple and recounted the story. He was grey and shaking and sat holding a bucket saying he felt sick. He started to close his eyes and was falling asleep in his bucket. I phoned NHS 24 who told me to take him to casualty. We got in at 5-45. They had faxed our details ahead. They looked severely harassed, four of them were huddled round the computer pointing and scratching their heads. 'We got a new computer system installed today', they ventured. It was going to be a long night - Lucky us!

We sat by the open door in subzero conditions, occasionally having the entrance curtained off as badly injured people were brought in - presumably after car crashes and likes, and bumped up the queue. In the first three hours no one was seen or even sent to triage! A computing hiccough, I suspect. Everyone was starting to grumble and groan. Eventually a nurse came out with a pencil and clipboard and did it the old fashioned way! By quarter to ten Marcel was seeing straight enough to offer in a loud voice to go in and sort their computer for them - the four  fifty-something admin ladies were still apologizing and scratching their heads! Finally, just as the first of the drunk was starting to piss everybody off and the police were being called over Marcel's name was called and he was diagnosed with concussion. The nice doctor told him he'd probably have a headache for three days so to stay home from school! When I mentioned his prelims started this morning he looked appalled at the timing and wrote Marcel a 'To whom it may concern' letter. He then told me to take him home and check on him during the night every three  hours with strict instructions to bring him back if he should become confused.

I put him on the living room futon and checked him at midnight, 3-30am and then had to get up at seven anyway to drive him round his paper round - I wasn't taking any risks sending him out on the ice again before the exam! At one point he was gibbering nonsense but it sounded more like sleep talking than confusion so I left him to sleep.

Anyway, he seems ok today though his year head looked quite concerned on reading the hospital letter. It will be interesting to see whether he did ok in his exam or wrote complete nonsense. He claims it was ok but if he was confused, he'd be the last to know I guess!

I am seriously considering offering my blog accounts of our life this year to a national soap as a plot line. We seem to be living under the motto - What can go wrong will!
Posted by Phyl at 11:42 pm