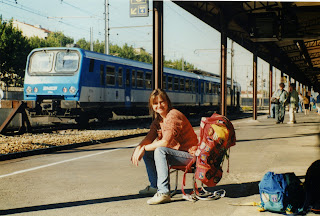 I had this great rucksack for a decade or so when I was younger. I think I got it at about 18 or 19 to go back-packing round Europe and it didn't die until BA accidentally sent it from Frankfurt to Osaka when I was 30... the problem was Marcel and I were going to Heathrow, so when my rucksack made it back from its world tour full of nappies and baby food, it was in several pieces. I took that as a sign I was finally meant to grow up and buy a boring suitcase! They did offer to pay for a replacement but it was irreplaceable. It had been everywhere with me and as you can see - it turned into a chair so you could always hang about comfortably between trains, even when the waiting time was hours. When trains turned out to be too full I always had a seat. I often took the Strasbourg-Marseilles train on a Sunday when I lived it France and was asked by countless strange young men if I would allow them to take a photo of me on my rucksack. At first I took it as a compliment, till one night a guy actually asked if I'd mind getting off it so he could see it better on his photo! I wasn't half as interesting as my trusty luggage! Anyway, looking through some old photos last night brought it all back - those were such special times. I can't help think Ryanair with their specified case size have killed off quirky things like my old bag! I don't think today's students will have the same to look back on!
Posted by Phyl at 7:16 pm