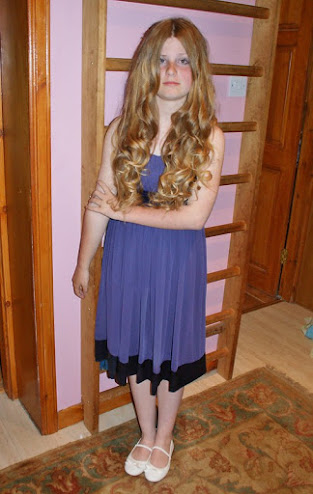 I had been apprehensive about the primary school leavers' dance for about two years! Lots doesn't really do feminine. To give her her due, she has come a mile from where she was two years ago, still in football strips and only talking to boys. She now only talks to girls and wears girlie jeans and pink hoodies - still a dress, shoes, hair and make-up was a bit further to go. When the topic of limos came up a year ago, I figured paying the ten quid to book a place, would at least guarantee Lots going, so I coughed up.

About six weeks ago I started thinking of how to get her into a dress. Obviously spending fifty (or more) quid on a dress for someone to never look at it again isn't ideal but luckily I have some wonderful friends with older daughters who offered to lend me several options for her. As they arrived one by one and I hung them in a row, she simply stared them out in horror. I was slowly expecting the meltdown but it never came. I asked her over and over to try them, getting nowhere until the weekend before the dance. Finally all except one turned up on my bed one night. I assumed a decision had been taken. I turned my attention to hair. I asked her again and again what she was planning to do and was met by a wall of 'I don't know'. With just hours to go, she pointed at a wavy haired model on Facebook and said 'that'll do'.

Not reckoning on her having three times as much hair as me meant it took from she got home from school on Thursday till ten minutes before we were due to leave to do her hair. ( Ninety minutes) So we were left with ten minutes to change into her dress and shoes, put on some make-up and leg it under a huge brolly in the torrential rain.

We managed to get to Sara's without any tears or snapping.

I know a lot of pressure is put on the kids to grow up now and go off to high school but I definitely think that although Lots may be ready intellectually, I needn't worry she'll be fighting me about being allowed to go out partying wearing tight skirts and too much make-up for a wee while yet - phew! Amazingly, after looking at her hair like that, she concluded she preferred how it usually looks! 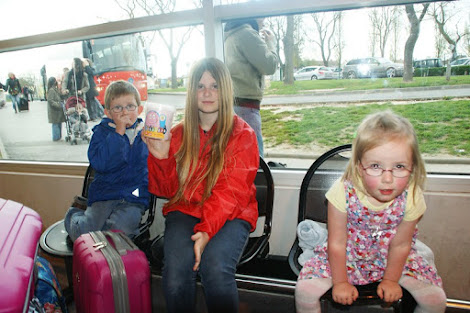 She definitely has a way to go yet!

Anna on the other hand is a whole other kettle of fish. On finding the discarded dresses on my bed, she announced (at the ripe old age of 4) 'Don't bother sending that pink one back, I'll be needing it for my p7 dance (in 7 years!) and I'll also need tall, pointy shoes, sparkly earrings, a hairdresser's appointment, a tiara and lots and lots of of make-up!' - Gulp!