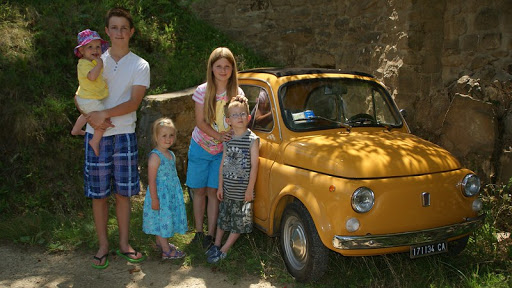 I know I have ranted till I am blue in the face about designer labels - but I still don't get them. Maybe it's my Scottish blood but why would anyone pay ten times the price for a label?

I was out shopping today separately (because of football commitments) with my oldest two kids. Marcel the designer man, and Lots the sensible. For £27 Lots bought herself a pair of jeans, three t-shirts, a jumper, five pairs of pants and five pairs of socks. She was extremely happy and I dropped her at the park with a friend then picked Marcel up. He was given money and told to buy himself clothes too. He first tried Bank, the Jack&Jones, Foot Asylum and then stood longingly outside Schuh for a while but concluded that he could not actually afford even a pair of shoes!

While he looked more and more depressed I looked into Schuh's window to get an idea of the price range inside. I noticed a pair of rubber flipflops - not unlike the ones Marcel is wearing in this holiday photo from last summer - except I bought his in ASDA on the eve of our departure for Tuscany at £2.50 and these ones in Schuh seemed to cost £35! I must be missing a decimal place, surely? Nope - on closer inspection there was a tiny disc on the strap marked UGG. It was less than 50mm across!

I can see the time has come again to go through my two hour rant to Marcel about designer labels - I know it will fall on deaf ears, but I can try yet again (with Charlotte giggling on the sidelines!)
Posted by Phyl at 12:52 am

I can remember being about Lotte's age and going to the shop with Mom for school clothes. Now, in the US we can wear what we want, but at that time, we are talking 1975, it was all psychedelic colours and Paisely patterns with Elephant pants. All I can remember is hating the fashion trends! It wasn't until I was 17 and nearly ready to leave High School that I was bought designer clothes. Mostly for graduation, but up until then, I thought the fashion industry was completely Barking! Perhaps it is due to the lack of actual nutrition they allow them? xx CC