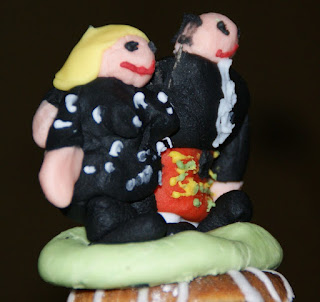 Last year on our anniversary I had a mini-moan about the fact that our anniversary should really have been some other date many years earlier. Outside forces - that is to say my ex-husband and his obsession with hampering my divorce for three years, and Thomas's then employer choosing redundancies as their  way out of the start of the recession - meant we were stuck with some strange date in the wrong month and the wrong year.

Much as I still feel like grumping a little about that, I have learned from living with a positive and dynamic man whose glass is almost always half full, so I will endeavour to pick a positive point about our wedding anniversary to blog each year instead of moaning. Sometimes it might be something that made me happy, something that made me laugh, or simply the fact that I got my man in the end, even if the road was a bit twistier than I'd have liked.

So what will I choose to be my first positive point? It has to be the cake top, doesn't it? Thomas decided he could sculpt us out of marzipan. The day before the wedding he asked me the colour of my dress. I had no idea why he needed to know - but it all became clear when the cake was unveiled! The kilt is cute as hell and we're very cuddly looking, if a tad shorter and more overweight than in real life. But mostly I loved it because it was so imperfect. It was handmade by him for us and no shop-bought wonder would have been half as cute and lovable!
Posted by Phyl at 12:51 am