Anna and the Peugeot 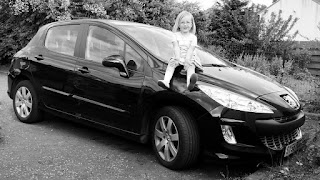 Kiddie priorities can be mind-boggling at times. I drove Léon to Beavers tonight and then on to Sunbeams with Anna which starts ten minutes later. We were sitting in the car park waiting for the hall to open when she spied the diagram telling you not to put babies in rear-facing seats in front of the passenger airbag.
"What's an airbag?" she asked. I explained it was a big pillow that popped out if you were in a crash. "Oooh," she replied, "let's crash daddy's car so we can see what the airbag looks like!" Emmm, no! I don't think so. "Oh but muuuum, I've always wanted to see what an airbag looks like!" (Wait a minute, two minutes ago you didn't know what an airbag was and now you've always wanted to see one! Drama queen!) I explain how often we use the car and how we need it and she looks totally disinterested and points out I have a people carrier so it is superfluous anyway! (She doesn't pay the petrol costs obviously, given the whole point of Thomas's Peugeot is so we don't need to use the people carrier on a daily basis with its 80l diesel-guzzling tank!) Anyway we agreed to disagree on experimenting with crashing daddy's car, for now anyway.
Posted by Phyl at 1:16 am