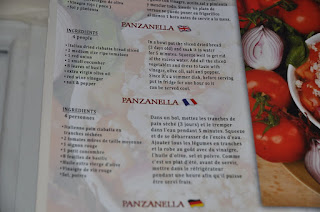 It just occurred to me I am running out of February fast and I have not yet publicly shamed my Italian calendar this month. I won't go into the same dissection as last month for fear of boring you all but I think I have to point out my particular fondness of that well known French verb 'squeeze'. Give me strength. And surprisingly the German for 'squeeze' seems to be none other than 'squeeze' as well. Such mutually comprehensible languages French and German, no?!

Another howler has to be the choice of 'robe' or indeed 'Kleidung' for salad dressing. I have all sorts of odd images in my head!!! And I'm still searching for a verb in the first clause of the last (grammatically diabolical) German sentence!