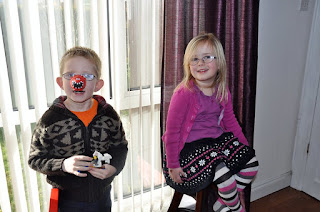 Friday had been world scouting (or something like that) day. Kids were allowed to go to school in their Beavers, Brownies, Sunbeams, Rainbows, Guides etc uniform if they wanted to.

Léon proudly donned his Beaver suit, as he calls it.

Thomas has always been quite keen, in a Scandinavian kind of way, to have Anna go to Beavers with Léon once she's old enough, as it is open to both sexes, rather than send her to Rainbows or Sunbeams as they are all female. I don't particularly care but always suspected a princessy type of girl like Anna would be horrified to be one of the token girls in a predominantly male Beaver troop, when there was a girlie alternative. I also figured Thomas wouldn't stand a chance after Friday as she'd see all her wee pals in Sunbeam suits.

So as Léon got ready for Beavers last night I asked: Anna would you like to go to Beavers or Sunbeams? Anna thought for a moment and replied very seriously: I think I'd rather go to Sunbeams - I'm not sure I really always like boys - they can be a wee bit windy-up at times!
Posted by Phyl at 12:02 pm