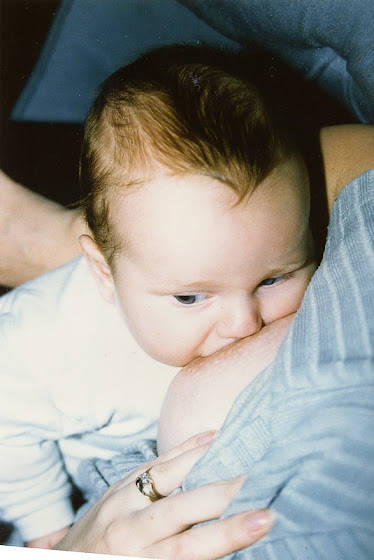 I remember when I was pregnant with Marcel and the Scottish midwives were trying to increase breastfeeding stats in Scotland, we were given ante-natal classes and shown videos of other more progressive countries, mainly Scandinavian ones. We were shown Norwegians happily breastfeeding kids as old as five, just to get it into our heads that it was a completely normal and natural thing to do.

As a baby of the 60s in Glasgow, I had been bottle-fed. I was 29 and pregnant and had never seen anyone breastfeed in my life. I decided to give it a try anyway, partly inspired by the Scandinavian model. I didn't find it all that easy at first but I'm a stubborn bitch so I persevered. I'd been told that you didn't need to wean babies off the breast because one day they'd stop feeding. So I waited and waited and at two, when I was pregnant with Charlotte I finally looked up how to wean Marcel, because he didn't seem to have read that chapter of the book! So I went into it intending to feed my kids for three to six months and did each of them for two years. I worked full-time back than but I determined that if he'd not had formula, he wasn't getting any as I'm not a fan of the stuff. Of course that then set a precedent. I couldn't favour one child over the others so if one had been breastfed two years, five would need to be breastfed two years. If one had not had formula, five would need to not have formula. But basically it all went back to those Scandinavian examples.

I'm quite a laid-back, easy-going person. In fact I've only been referred to as militant in two contexts in my life 'Here comes the militant breast-feeder!' and (in front of my religious family-in-law (oops)) 'Just because you're a militant atheist dear!' - (Maybe not the best time to call me that, Thomas! ;-)) Anyway as you can imagine, if you breastfeed for ten years, you have a lot of experience of different situations. I've breastfed in different countries - on top of the Eiffel Tower, in the restaurant at the Carlton Hotel in Cannes, in Italy, Spain, Sweden, Denmark, Latvia in the biting cold, the US (up the Empire State Building and on top of the Rockefeller center - I'm an experienced altitude breastfeeder!!) etc I've done it on buses, planes, trains, restaurants, you name it. I figured one day I would have a show down with some ignorant person who found nourishing a tiny, helpless infant offensive so was always ready with my arguments but was pleasantly surprised. People actually came and talked to me. Grannies came over and reminisced about their children but mostly people didn't even notice. No one complained, tutted, sighed or rolled their eyeballs once in ten years.

Fast-forward to last week. Thomas is going home to Denmark for a week, meeting some old friends, checking out some business contacts. He used to be quite active in politics over there (surprise, surprise) and he's meeting up with three girls from his old party for lunch. Now here's the bit that made me fall off my seat in disgust and shock. The conversation went something like 'what about that café?', 'no we can't go there X has a newborn and might need to feed it and they don't allow breastfeeding there' 'what about that other one round the corner?' 'No I was thrown out of there for breastfeeding my baby a few years back' etc, etc. When exactly did Denmark turn into some backwards looking puritanical state? It's a sad day when nowhere in Scotland complains but you can't feed your newborn in public in Scandinavia without being prepared to fight. I was completely appalled. Thomas even pointed me to this article which had me spitting with rage.

Why are Danish women allowing this to happen? Breastfeeding becomes the norm when five year olds pick up their plastic dolls and stick them up their jumpers because that is what they are used to seeing. Even my boys did that! In fact I have a sweet video of Marcel breasfeeding Lots at the tender age of 2.5 but I'm keeping that for uploading on his 18th birthday!!!! Breastfeeding shouldn't shock. Don't let your daughters reach the age of 29 thinking breastfeeding is too offensive to do in public. I can't tell you how upsetting I find this. You may argue that that is a minority case but it shouldn't happen at all. You're feeding a baby not lap-dancing in public.
Posted by Phyl at 11:41 am