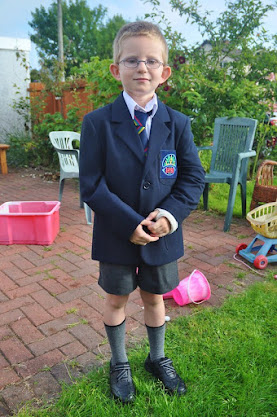 Since the kids went back in August, the school has been very enthusiastic about their new (old-fashioned) uniform. I moaned about it before it was forced upon us and a term in my opinion has not changed.

From Léon (p3)'s perspective: The little buttons on the shirts have added at least five minutes onto his dressing time, and getting both sides of his shirt aligned is a bit hit and miss - I'd say he gets it one button out 30% of the time. He can now tie a tie but it is often too long, too short, over one side of his collar etc. True enough, if I dress him, he can look neat and tidy but he turned seven at the weekend and has been dressing himself for years so why should I go back to dressing him? Of course, after six hours in school, he always comes out with his shirt hanging out and sticking out below his jumper, looking vaguely like he's been dragged through a hedge. He wears his rain jacket every day but on the days that it is too cold for that and I zip his fleece inside he gets annoyed at the inner sleeves popping out of the outer ones. Come winter, he will not be wearing the prescribed school jacket. Forcing us to buy three new jackets was a step too far so I have bought him a Tesco one instead. It cost half the price of the prescribed one, is just as warm and can be worn on weekends. 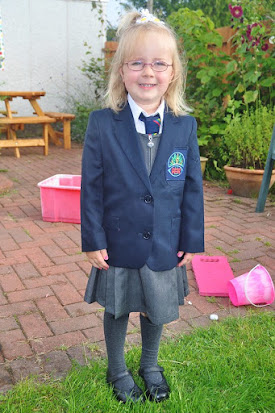 From Anna (p1)'s perspective. She is unable at four to button the stiff little shirt buttons. She could easily have coped with the old polo shirts but the shirts are too hard. With difficulty she can unbutton the ones she's worn often enough to loosen but straight from the wrapping, she can't unbutton them either. She still can't tie her tie, so I have to do that in the mornings. Like Léon, everything hangs out after six hours unless she wears a pinafore, which she does half the time. She openly admits her teacher is forced to do her buttons after gym - a great use of her teaching time. Of course, we have been told p1s are allowed to buy extra polo shirts for gym days over and above the normal uniform but quite frankly I have bought enough and if they are stupid enough to bring in this uniform for four year olds, they can deal with the consequences. Anna, too has the same issue with the rain jacket. And like Léon she will not be wearing the school winter jacket once it gets colder. I found a much superior coat on ebay for half the price.

From my perspective. I am utterly sick of ironing shirts when I used to simply put them straight in the polos from the tumble drier. I am fed up doing tiny buttons half-awake before I have tracked down my reading glasses in the morning. I don't think they look smart, they look rigid and uncomfortable. If they wanted them in a shirt and tie for the school photo, I wouldn't have objected but daily, I think it is a major leap backwards from the comfortable and functional uniform Marcel and Lots got to wear. 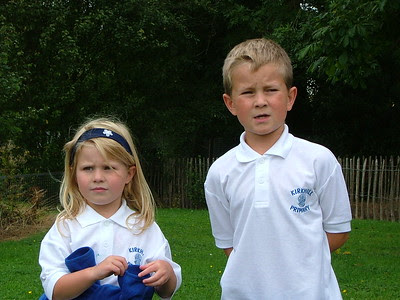 From a foreign perspective. My mother-in-law turned up last week from Denmark for the first time since the kids started back. What happened to the nice comfortable uniforms they used to wear? she asked. This is just over the top, are they trying to make them look like they go to Eton, or what? I guess that's a thumbs-down from her too.
Posted by Phyl at 6:59 pm

well Phyl when I was in school on Monday about 6 kids (mostly girls) were waiting to get help to dress after pe. so yes i agree with u entirely. This is great from P6 upwards but not so great for P1.

Why was it not agreed that if its photograph day or class outing then wear school shirt and ties but not on a daily basis.

I never quite understood the idea of school uniforms.

If it's because the kids shouldn't flash their parents wealths by wearing expencive clothing, they just flash it some other way: Shoes, jewellery, bags, purses, bikes etc.

If it's because of bullying because of clothes, the kids find something else to bully about.

The only reason I can think of, is for the school to make money on selling uniforms.

I never quite understood the idea of school uniforms.

If it's because the kids shouldn't flash their parents wealths by wearing expencive clothing, they just flash it some other way: Shoes, jewellery, bags, purses, bikes etc.

If it's because of bullying because of clothes, the kids find something else to bully about.

The only reason I can think of, is for the school to make money on selling uniforms.

I quite like the idea of them not needing to compete on the money front - some of the kids here are extremely wealthy so mine could never compete. Given jewellery isn't really allowed because of sports and shoes are also prescribed as plain black, it does keep the price down, but I'd much rather it was something functional like a sweatshirt and a pair of cheap jeans.

And it isn't the school that sells most parts of the uniform, it is the local supermarket in general so it is just to have them all equal.

I just don't get the old-fashioned executive look.