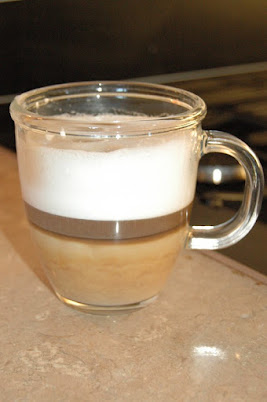 So I spoke to my little foreign friend on Monday. He didn't instill the greatest confidence in me with his opening gambit 'From your notes I see you are having problems with your Gaggia Titanium!' (It's a Gaggia Synchrony Logic). I explained that Philips/Gaggia had claimed to have simply descaled my (non-scaly) machine and that in doing so they had somehow managed to repipe the water through a different outlet. He immediately suggested that given it was under a year old and this was its third fault, I should take it back to the retail outlet I bought it from for a full refund. When I mentioned I was in Glasgow and it was in Tuscany I was met with a sigh! He suggested that maybe I could allow his team to have one final shot at fixing it and this time he'd put on my notes that the machine should be fully tested before it was couriered back to me! 'Now there's a novel idea!' I teased him. I whined a little about the fact that I had not had a decent coffee now since August and he promised faithfully my machine would be returned this time with a large jar of Gaggia's best coffee for my trouble. I cattily commented that that would be lovely assuming I could get the water come out the correct spout next time round!

Wee Kenny was sent round from DPD couriers again. He's now starting to thank me personally for keeping him from ever being made redundant. Off he went with my machine again. Then the postman rang the bell. There was a box addressed to me. I didn't recall ordering anything. I opened it expectantly. A large jar of ground Gaggia espresso coffee - what a lovely gesture... except my machine takes beans! Ho hum... I'm not holding out much hope for repair number three :-(