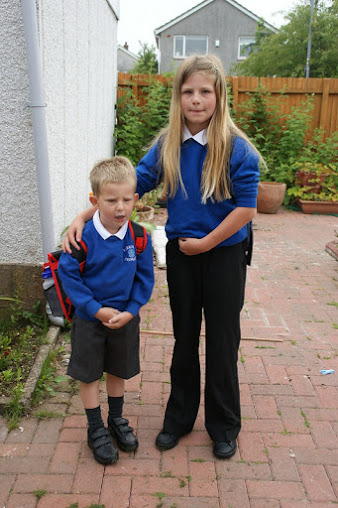 I have to admit when I blogged about uniforms six years ago, I could never have imagined we'd be taking a huge leap back to my own childhood as late as 2012.
East Renfrewshire Council decided it needed new policies on school uniforms about a year ago, claiming kids weren't smart enough. When I look at my two above, they look smart enough to me - certainly as smart as I'd expect any 4 and 10 year old (when this photo was taken) to be. I assumed, stupidly, that what the council was intending was to have high school pupils pay more attention to standards. Girls' skirts had been becoming obscenely short, jackets with expensive logos had started creeping in to replace blazers. I was not against them disallowing skirts short enough to reveal underwear before Lots starts high school in the summer.
A year long consultation took place, but ultimately it became obvious that although parents and kids could state a preference, head teachers would have the final say and their suggestions would be backed by the council assuming they weren't seen to be excessively eccentric.
First I saw St Cadoc's primary's new legislation when it came out at Xmas. P1-3 would keep the comfortable and functional polo shirts and sweat shirts, p4-7 would be forced back into the 1970s style white shirt and boring tie. School jackets would become obligatory, despite the expense, given the kids all have non-school jackets too for weekend wear. I was appalled and braced myself for similar, but certainly not for worse. Kirkhill dragged its feet till last Friday when the full horror of the new plan was dropped on us like an H-bomb. The polo shirts and sweatshirts would be banned from August for all years. Kids as young as 4 would be forced to sit all day in uncomfortable shirts, ties, and grey everything else - but not just grey - it has to be the correct mid-grey shade, even dark grey is a criminal offence! The cheerful sea of blue that has greeted me every morning for the past ten years is being replaced by a gloomy grey to match the Scottish climate in all its horror. The bag of 40 odd (£10) sweatshirts in my loft is simply meant to be tossed out in favour of me forking out money I don't currently have to add to the sea of grey. The sweatshirts tumble dry time and time again as they are durable. Léon's one grey jumper turned into a limp rag after its third wash. A quick canvassing of opinion at the school gate on Monday morning found not a single parent who was happy with the new uniform.
When every other council is moving towards comfortable and functional, why on earth are we heading backwards at such a rate? Of course, the school sees itself as somewhat better than your average school - its results confirm that but getting above its station prescribing private-school-type uniforms isn't fooling anyone. This is a good school, but a state school so people may very well struggle to buy the newly compulsory school winter jacket, school spring/autumn jacket in both waterproof and fleece materials. Because of the climate, I can't see any of the three I can leave out. School tracksuit tops are also now compulsory and you can even add on a non-compulsory blazer if you have not yet gone bankrupt! (That'll be likely!) I have checked East Ren's clothing grant for poorer families. At £50 those families will not be able to buy anything else once they have forked out for the compulsory jackets. I know Newton Mearns isn't normally associated with poverty but who lives here? Middle management - the very people who have been losing their jobs in this recession and who are struggling to pay the overpriced mortgages they took out to get into these very schools! When middle management and directors are made redundant, they don't simply walk into a new job the following month.
At the school gate people said they were feeling particularly sorry for me with five kids - given the number of hours of ironing real shirts entails! (Poloshirts can be worn from the tumble drier). I know non-iron shirts exist these days but they are much more expensive - especially in a year I have to replace every item on the uniform list (unlike in normal years where most things have simply been passed down). I hadn't even taken that gripe on board given Marcel has done his own ironing since starting high school. It's a definite added burden. I won't be asking Anna, at four, to do her own ironing, will I?

I may be strange and unusual but I have no desire to advertise my kids' school on weekends so object to having to buy school jackets for during the week and separate ones for weekends. Until now my kids have happily gone to school in their pink or green anoraks, or ski jackets and left them on a peg at the entrance. Apparently this makes them too messy-looking on school trips off the premises - they go on at least two trips a year... sometimes even as far as the local shops! Is this worth my expense? No! Try to ask your 10 year old to wear a uniform jacket when she's out on weekends in the park with her friends. She's no more likely to wear the jacket that she associates with school than the tie! Thanks Kirkhill for doubling all my expenses (for each of my kids!)
I feel in banning the uniform long associated with the school, the head has ripped the heart out of Kirkhill. It is a hugely negative, backwards step. I feel painfully sad to think of my kids being forced to sit unnecessarily in uncomfortable, non-durable, depressing grey uniforms, with boring ties like little 4 year old executives when it was such a happy and carefree place till now. I am appalled at the endless list of jackets I am meant to buy while still burdened by the recession. I'm not sure why they think any of this is necessary in this day and age. Learning should be happy and fun not boring and stilted.  After all it is the quality of the teaching that matters most... It isn't the uniform that makes them learn better. I am married to a Danish guy who managed to do post graduate studies right up till his thirtieth birthday. He is one of the best educated, most intelligent people I know. And he managed this despite having spent his entire childhood wearing jeans and a t-shirt at a non-uniform school - shock, horror!

I am also not sure what has happened about the real issue that started all this? The high school doesn't seem to be suggesting new uniform policies! How ironic!
It's probably pointless but as always I will email off an official complaint to the head, cced to the council and Ken Macintosh! Wish me luck!
Posted by Phyl at 3:14 pm