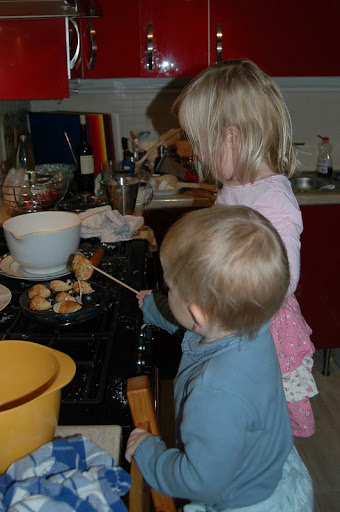 She's so bloody fast, that one, when it comes to cooking!

I just couldn't stand another day of bread at lunch time or toast so I decided to make some home-made leek and potato soup. I'd fried the onion and leeks, simmered in the leeks and potatoes and the lovely vegetable stock and then just remembered I had some delicious fresh, flat-leaf parsley needing used up in my fridge.

Amaia was helping me stir the soup but it was safe enough, on the back burner with the handle out of reach, so I took the two steps towards the fridge. It was then I saw her in slow motion out of the corner of my eye. She reached out for the half-full Schwartz-type jar of chili flakes and quick as a flash emptied it in its entirety into my soup! I darted back and scooped out at least two full teaspoons but the rest had sunk.

Thomas and I did manage to eat it, just, with a lot of cream and a hanky to catch the drips from our noses but I swear it was borderline... almost like she'd grated two scotch bonnets into it!