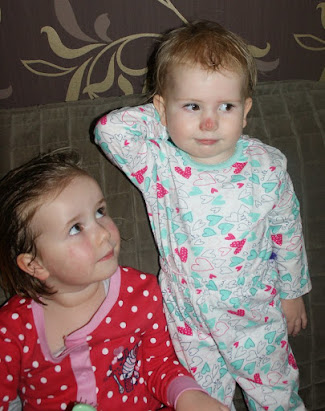 All of my kids were trained around their 2nd birthday. It never took more than two or three days and subsequent accidents could be counted on one hand.

With Marcel and Charlotte, I had no experience so trained them on their 2nd birthdays then kept them in night nappies perhaps another 2-3 months so they were completely dry by the third month after they turned two. By Léon, we tried taking the nappy off at night time within a week of day time and surprisingly that worked fine. With Anna and Amaia, night nappies were used for two nights after potty-training and again, all went smoothly.

When I have mentioned this people are in general surprised. Here in Scotland no one is ever surprised they are dry during the day at two, though it is around the earliest people attempt it here, however reactions in Denmark are always of great surprise. I don't know if their later school start perhaps makes them see their children as younger than we do but I have never met a Dane who thinks two is normal... Two years ago for instance, when we attended Peter's 70th in Copenhagen, Anna had just turned two and was the youngest of all the grandchildren (they ranged to 13 months older than Anna) and the only one who was potty-trained.

Anyway, this is turning into a cultural comment, when I was simply wanting to make an observation about human nature... On surfing through Mumsnet and the likes last night to confirm my gut feeling, I found out that although almost all Brits potty-train before three, many kids are still in night nappies till four or even five. Whole forums are dedicated into how to finally get them out of night nappies, advocating you can't take them off until they are dry through the night for a week and the likes. I wonder, given my own experience, if people are creating their own problems? If you reach quite late into childhood still wetting your nappy, it is your norm, if you have been taken out of night nappies at the end of babyhood, your norm will be staying dry at night. It has worked for me, five times over...
Posted by Phyl at 3:05 pm

But what do you do about getting rid of the night nappies? Do you just put the kidt to bed without one and then no accidents or do you change a lot of sheets?

Ellen wakes up every morning with a soaking wet nappy.

Babies don't tend to pee while they are asleep so they are either doing it before they fall asleep or immediately when they waken up, so I make sure they pee about an hour before bed, then again at bedtime and I take them to the loo when they waken up. I try to be there when they waken up for the first 4 or 5 days after the nappy comes off but already (after 3 weeks) Amaia is happily sleeping 9pm through to about 9-30am without an accident. I have only had to change sheets for my kids once each. ie they have each wet the bed once some time in the first 2 or 3 weeks. Amaia did it once on the third day but not since. I think that's why doing both at the same time works so well - there is never any confusion about when it is ok not to pee on the toilet, and because they are so young they forget they ever wore nappies after about a week. The older they are, the harder it is to forget.

And most importantly I explain to the baby what I am doing and what I expect. They understand more than we give them credit for at two, I believe.