SCHOOLWEAR - THE CHANGES ARE NOT ENOUGH!

I just picked up my kids from school. I usually drive down the main road to the school as it is quite far but for a change today I came at the school from the other side which necessitates passing the high school that their school, Kirkhill Primary, feeds on to. The high school kids were just coming out of Mearns Castle in their uniforms. The thing that really struck me was the sea of red ties. Little girls wearing ties in particular. It took me back to my own school days when things were even worse. Nowadays at primary school kids wear a polo shirt with the school logo and a sweatshirt the same over the top of that. 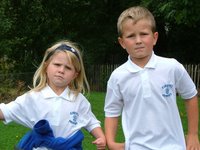 I am all in favour of school uniforms for many reasons. First you spot someone who shouldn't be in the playground immediately when all the others are dressed the same, secondly I don't spend hours in battles explaining to my kids why they don't need designer schoolwear, there's no bullying related to clothing - everyone is dressed the same so no one is obviously very rich or very poor etcetc. This becomes even more important at high school where they are more aware of designer clothes and where an outsider in the school area would otherwise be harder to spot. However, whereas primary uniforms have moved on from the starched shirts and ludicrous ties I had to wear even as a tiny 4 year old, 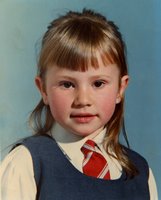 high school uniforms have moved very little since I was a child. Girls still have to wear ties to high school, although they now wear trousers at least. (I wasn't allowed to despite the Scottish climate!) I think uniforms are great for the reasons above but why can't they be comfortable and functional - a tie is utterly useless and where 20% of the boys may be unlucky/stupid enough to move on to careers where they are stuck wearing stupid ties, none of the girls are ever likely to need one in their adult life. I see absolutely no reason why high school uniforms can't be a simple T-shirt with logo just as they wear until they leave primary school at 12? Come on - let's move in to the noughties, guys!
Posted by Phyl at 4:53 pm