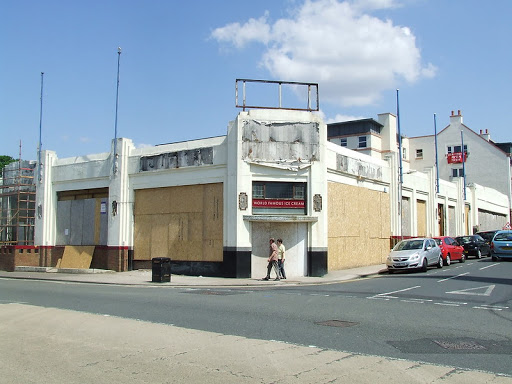 Last spring I suggested a day trip to Largs because it was a nice day. I imagined a nice drive, a stroll along the beach and an ice cream at Nardini's. Much to my horror on arrival I found Nardini's derelict with a sign advertising luxury flats attached to the building. I bored Thomas and the kids with the story of my first ever flavoured ice cream on a trip to Nardini's circa 1972. I told of how my parents had bought me a strawberry cone and I had stared at its pinkness in wonder having only ever seen vanilla, or 'plain' ice cream as we called it, in my life before then. My kids of course assumed, as always, that I was some sort of prehistoric fossil from an era of black and white tellies.
We returned home and I sadly uploaded my last photos of Nardini's, or so I thought.
This week I was on facebook when I noticed a friend, who lives in Canada, had set his current status to 'going to Largs for ice-cream from Nardini's'. Could it be true? Several friends queried its existence there and then and the reply popped up 'Nardini's is very there - all redone and reopened.' Music to my ears! Less than twenty-four hours later with Thomas and all 4.3 kids packed into the car we drove down to Largs to find it was indeed 'de retour'.

The ice creams on display made your mouth water. The flavours and presentation were superb and for someone who tends only to indulge in such extravagances in the likes of Nice or Paris, the Scottish prices were even better!
I had caramel shortcake and honeycomb, Thomas had tablet, raspberry cranachan and one of their many chocolates, Anna had banoffee pie, Lots had After Eights, Irn Bru and caramel shortcake, Marcel had another chocolate with tablet and caramel shortcake and for my Pudgeman - what could we buy him at nearly 4? A large cone with Nardini's own fresh strawberry ice cream of course!
Hopefully one day he'll take his own kids to Nardini's and tell them all about the day when he was nearly 4 when Thomas and Mum bought him a lovely strawberry ice!
Posted by Phyl at 5:10 pm