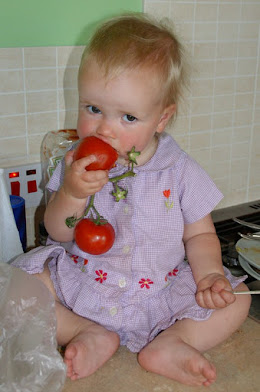 It is lovely to watch a helpless baby grow into a functional member of society. I don't just mean sitting, crawling, walking. I mean the way Anna has watched her parents and siblings and learnt slowly how to become a tiny individual. It started with the dishwasher. She takes dishes from it and puts them in the Welsh dresser, more often than not in the correct place. Then I noticed she watched me binning things and took to picking up rubbish and putting it in the kitchen bin for me. Now she is starting to realize the difference between the normal bin, the paper bin, the glass and tin bin and the plastic bin. Clever girl! She also notices when people go to the toilet and insists on following them in and handing them a toilet roll! That's not bad considering she doesn't use the toilet herself yet. She happily goes through the washing basket taking out items of clothing and telling me who each one belongs to and is generally correct - what powers of observation. Yesterday I had to laugh when I noticed she was copying my technique for mopping up a spillage from the floor using my foot to move the cloth because bending over isn't that easy when you are old and pregnant! It just looked so comical considering how close she is to the floor at less than a metre tall! Also as you can see from this photo, she can also rustle herself up a meal if lunch isn't forthcoming at a reasonable time! However, there are some things Anna does that remind me she still has a few steps to go on the evolutionary path before she reaches the status of acceptable member of the human race... At the weekend I had taken a broom and swept the dining room floor. I didn't have the brush and pan handy so had left the pile I had swept up beside the door. I left the room to find the small brush and came back to Anna happily sitting eating the furry green food items from amongst the dust, hair, sand, soil, and miscellaneous food items from the same pile! Yeuch Anna! Humans don't do that!
Posted by Phyl at 3:49 pm