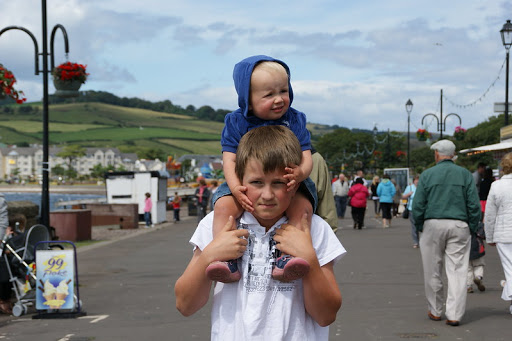 Well, here's a sight we won't be seeing for the next month or two... Marcel won't be picking up Anna and walking about on holiday because he's managed to break his upper left arm.
Given every time my brother breaks an arm he ends up in sugery having the nuked arm bones joined together with metal plates and wires, my initial reaction when I received Marcel's text was to panic. None of my kids have ever broken anything you see. I tried every means to contact him for details - mobile, email, msn all to no avail and didn't get the full story till about 4 hours after the event. (My ex husband, who is looking after Marcel this week, now knows how I would like future emergencies to be treated... of course).
Anyway it turns out the child, who has recently developed a major interest in the opposite sex, was chasing a female friend in the park behind his father's house when he slipped and fell. The girl he was chasing obviously didn't realize the severity of the injury so laughed and now Marcel has a major dilemma on his plate... he only has eight texts left to last the month but he has worked out that if he was to use one to tell her he broke his arm, then maybe the sympathy it would generate would be worth the sacrifice! Give me strength!
Posted by Phyl at 11:50 pm